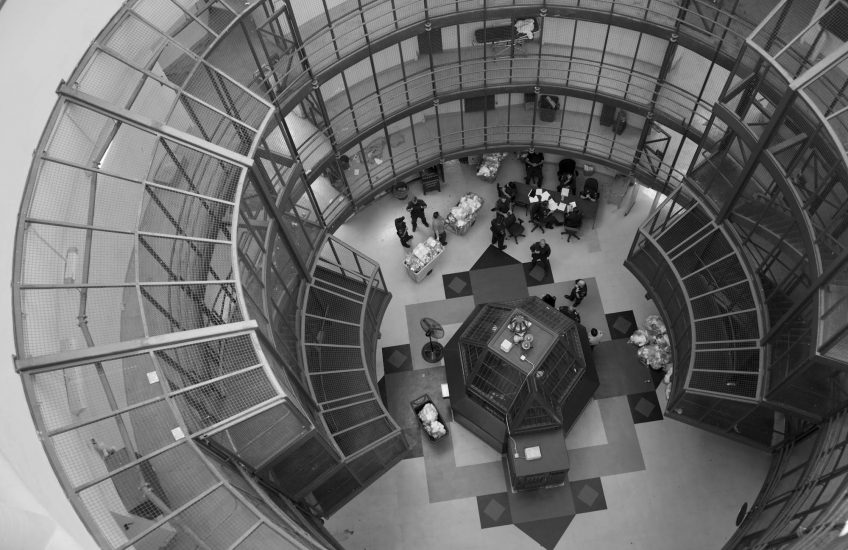 Kingston’s most famous front door has got to be the massive north gate at Kingston Penitentiary (KP). Framed by limestone columns and a stone wall that stretches toward Portsmouth Olympic Harbour, it dramatically marked the divide between our country’s most violent criminals and everybody else for 178 years.

That door closed for the final time in 2013, but if you’re still fascinated with what went on behind it, head to photographer Geoffrey James’s exhibit, Inside Kingston Penitentiary, now until December 7th at the Agnes Etherington Art Centre.

James, a Governor General’s Award-winning photographer, gained access to the prison during its final months in operation, and the result isn’t just an inside look at cell blocks and yards and the infamous Dome, but a witness to the people who worked there and called the place home.

“He wasn’t just going in as an outsider and snapping away,” says Jan Allen, the director at Agnes and the curator of the exhibition. “He was speaking to people, both guards and inmates and getting to know their stories, getting to know more about their experience. That’s evident in the photographs . . . and I think that comes through because he made connections with the people there.”

Those connections become clearer the deeper you get into the exhibit, which has forty-four works in two adjacent spaces. Near the beginning, you’ll see more of the bones of KP—barbed wire and yards, for example—but as you move through it, you’ll come face to face with the life of the prison.

“The most compelling for me are the views of a change of season ceremony that the Aboriginal inmates were holding, and Geoffrey was invited to attend,” says Allen.

Some of the most revealing photos in the exhibit and the accompanying book are those without any people in them at all, however. I’m thinking of the shots of the cells, in particular, just after the population was removed. In one, a mural of the Harley Davidson logo covers the entire space. In another, a painting on a wall of loons in a lake at moonlight. In others, “Go Leafs Go!” and “Tear down this wall!” etched on concrete.

“They [the cell photos] were kind of like a corpse where the facial hairs are still growing,” James told Canadian Art magazine recently. “They were the most tiring photographic days of my life, but I was happy to have captured all these tragic messages and drawings and murals, which were something of a surprise. I think it gives a voice to the inmates and gives us some intimation of the claustrophobia of the spaces.”

The cell photos are also perfect examples of how the exhibit takes you so far into the experience of KP that you forget James is behind the camera.

He is very much there, however, which is important to remember given how difficult it was to get him inside the penitentiary. It was very rare that anyone was allowed to go inside while KP was still in operation, so to gain access he and staff at Agnes worked on a proposal for months that clearly communicated how the project would capture this moment in the institution’s history.

Correctional Service Canada eventually embraced the project, mainly, believes Allen, because they saw this as an opportunity to have one of our country’s best photographers not only show the physical space of KP, but the space while it’s inhabited.

After viewing the exhibit and the book, you’ll see that the work it took to get James in while the prison was still full of life paid off.

“My hope is that visitors find their understanding of Kingston Penitentiary and incarceration itself might be enlarged or made more nuanced,” says Allen. “One of the things Geoffrey remarked on was that a lot of his expectations were defeated and shifted, and I think that becomes evident when people go through the exhibit.”

Inside Kingston Penitentiary is on now until December 7th at the Agnes Etherington Art Centre. Admission to Agnes is $5 for adults, $3 for seniors and students. Head to agnes.queensu.ca for hours and more information about the exhibit.

Click here for info about the accompanying book to the exhibition, Inside Kingston Penitentiary (1835-2013).