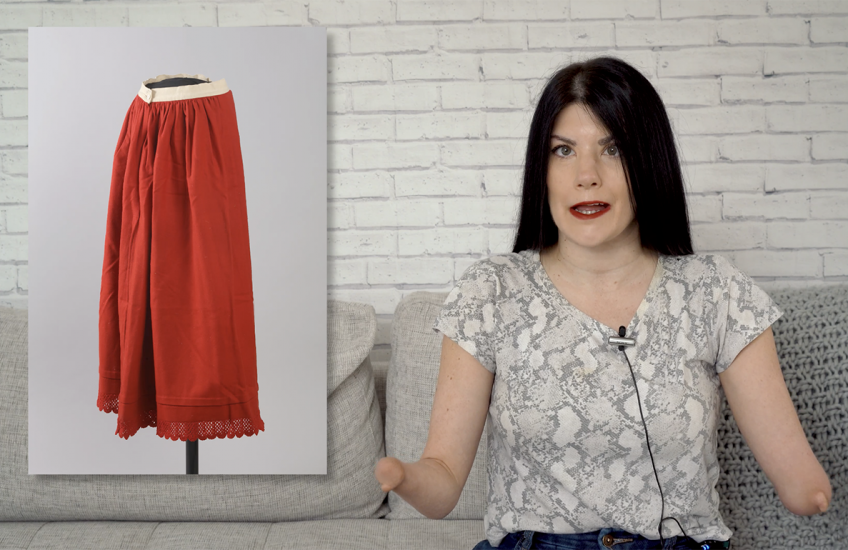 Agnes Gets Hysterical is a collaboration between Agnes and Kingston’s Hysterics Collective. Aligned with the Collective’s mission, this initiative seeks to disrupt the mainstream comedic narrative with diverse voices and punch-up comedy that raises feminist consciousness and strengthens community. Getting hysterical also ensures Agnes doesn’t take herself too seriously either! This series of video performances “riff-off” artworks in Agnes’s exhibitions and permanent collections.

Courtney Gilmour is one of Canada’s most unique voices and sought after comedy talents, named by NOW Magazine as “one of the top 10 stage artists to watch”. She delivered a breakout performance at the 2017 Just For Laughs Festival in Montreal by winning the Homegrown Comics Competition and filming a set for Kevin Hart’s LOL Network. Courtney’s victory at the 2017 Just For Laughs Homegrown was the first by a female comic in the 19-year history of the event. In 2018 she topped it with televised performances at CBC’s Winnipeg and Halifax comedy festivals, as well as a triumphant return to Montreal to tape a set for The Comedy Network at Just for Laughs.

Courtney was one of the 42 at Toronto’s JFL42 festival two years in a row with her own run of headlining shows and in April 2019 she wrapped a hugely successful tour as part of the Just For Laughs Roadshow. She returned once again to Montreal for another round of Just For Laughs shows including a televised performance on The Howie Mandel All Stars Gala airing on The CW Network.

Her solo Fringe show “‘Congratulations!’ Stories of Achievement, Embarrassment, & Self-Worth” debuted at the Toronto Fringe Festival in summer 2019 and was met with sold-out shows, glowing reviews from press outlets city-wide, as well as multiple awards including Best of Fringe and Patrons’ Pick, earning her three extra performance runs and a UK debut at Brighton Fringe Festival. The show is in the works for becoming a published book.

She has written for and made appearances on TV’s The Beaverton, the web series Space Dragon & Kim, CBC’s The Debaters, and Late Night In The Studio. She has an animated series currently in development. Courtney can be seen touring around North America and heard regularly on SiriusXM and CBC LOL. Courtney’s warm, accessible, and intelligent brand of stand-up has made her a hit with audiences nationwide.

This program is made possible through the generous support of George Taylor Richardson Memorial Fund, Queen’s University and the Province of Ontario through the Ontario Arts Council, an agency of the Government of Ontario.

Videography and Editing by Jung-Ah Kim