Probably best known as a painter, John Hartman shows consummate skill and expressive sensitivity in drawing throughout his print work. In Hartman’s landscapes, vibrant colour and fine line work scratched by a drypoint needle create a play of density and sparsity, with often a sense of teeming motion across the picture plane. Many of the works form a visual diary of Hartman’s childhood and adult life in the Owen Sound, Georgian Bay area of Ontario; he was born in Midland and still lives near Tiny, Ontario. Hartman often peoples his landscapes, using figuration in a narrative way, informed by local histories. There are sometimes eruptions of the miraculous in the natural landscape. Many of Hartman’s works refer to the local stories he learned growing up about the conflict between the Jesuits and the Huron; sometimes they refer to time Hartman spent living near the Ojibwa near Collins, Ontario. Like his paintings, his prints and watercolours are also a visual diary of his travels; this is especially evident in his three series that focus on global cities. In these, we see cities treated as pulsing landscapes as if seen from flight, drawing on a childhood dream of flying and the influence of Oskar Kokoschka’s expressionistic landscapes. Hartman declares the influence of David Milne, an artist linked to the Group of Seven, who invented the colour drypoint process that Hartman learned from studying his work and often employs. The Agnes has several Milne prints in our collection that show the soft burred lines characteristic of this process. 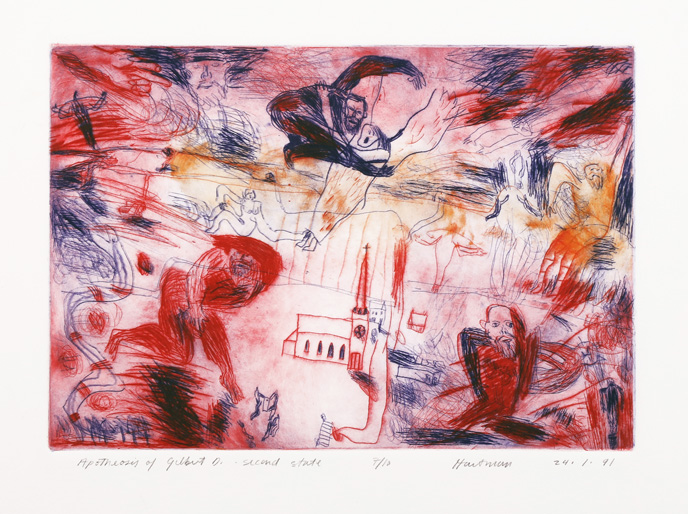