An inner architectural space, defined by prominent Doric columns and a triumphal-arch like structure, looks out onto a grand, two-storey courtyard populated by tiny figures. The low horizon line monumentalizes the architecture, while the dramatic lighting emphasizes the figures in the foreground. On the left are three peasants, one of whom points to the luxuriously clothed figure, who has been identified as the artist himself.Bellotto was the nephew and pupil of the Venetian view painter Canaletto (1697-1768). In 1747, he was invited to the court of the Elector of Saxony, Augustus III (1696-1763), in Dresden, where he became the official court painter. Augustus’s death in 1763, however, disrupted the painter’s professional trajectory and produced a shift in subject matter. Rather than painting topographically accurate views as decoration for palaces and hunting lodges, Bellotto depicted imaginary scenes destined for nobles and other high-end art collectors in Dresden.Bellotto depicts himself here in the red robes of the Venetian nobleman and attended by his servant Checo, indicating his elevated status as an artist. Venice is further evoked by the arcaded courtyard, which is based on Jacopo Sansovino’s Libreria Vecchia in that city, while Rome is suggested through the Constantinian archway separating the fore- from the middleground. The artist’s dignified self-presentation in such a grand environment is extended through the quotation from Horace’s Ars Poetica, which is reproduced in part on the Doric column. With its scale and allusion to the history of art and architecture, however, the present painting celebrates Bellotto’s versatility and proclaims his insertion into the artistic tradition. 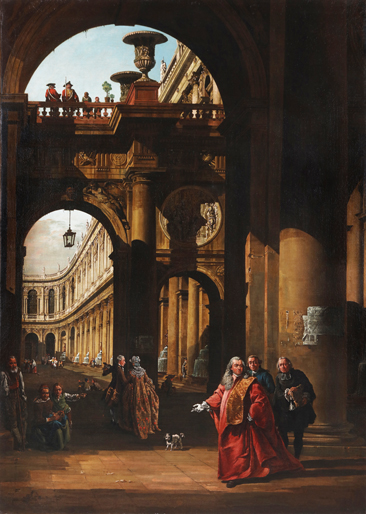