< Visit Hours and Admission Getting Here Accessibility Group Visits Visitor Policies Facility Rental and Floorplan
< Explore Exhibitions Collections Indigenous Contemporary Canadian Historical European Historical African historical Historical Dress and Quilts Search The Collection Publications Residencies and Fellowships
< Participate Talks, Tours, Events Classes, Workshops, Camps Academic Outreach School Programs for Grades 1–8
< Connect About Agnes Join and Give News and Stories Opportunities Contact
Visit > Explore > Participate > Connect > Digital Agnes Search
< Return to Previous Page
Harris, Lawren Stewart
Arctic Sketch XIII
1930
For Lawren Harris, there were two preoccupying forces that seemed to dominate his art production into the 1930s: nationalism and spirituality. Arctic Sketch XIII represents the height of these concerns. Harris, the unspoken leader of the Group of Seven, is well known for his belief that art, in both form and content, should be an expression of national character. He believed it was possible to project visually the essence of being Canadian. A 1913 exhibition of Scandinavian Art at the Albright-Knox Gallery in Buffalo prompted him and other Group members to espouse the idea that the Northern landscape itself held the key to this expression. At the same time, Harris was becoming interested in Theosophy and his spiritual beliefs merged with his nationalist project. A trip to the Arctic in 1930 provided the ideal environment for this confluence.Harris made only one trip to the Arctic, in 1930, with A.Y. Jackson. The following spring he exhibited six large arctic canvases and thirty-two sketches. The barren arctic terrain suited Harris' desire to pare a composition to its essence. Working in his studio from pencil sketches, he created austere paintings of spiritual yearning. Soon after, he abandoned all reference to landscape and became a non-objective painter. 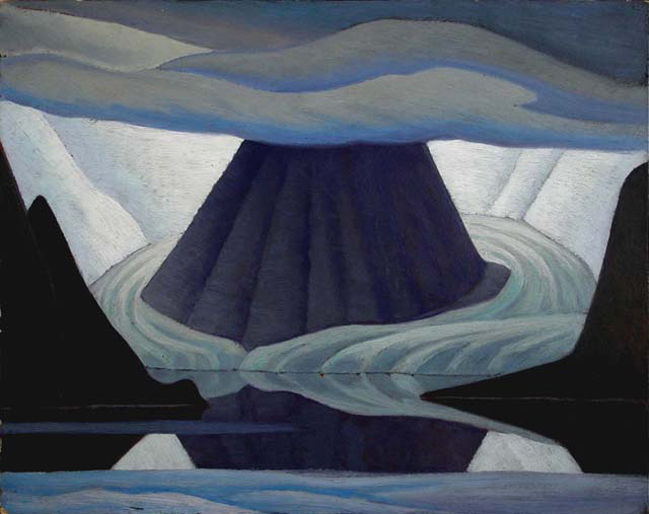