Kenojuak is one of the most acclaimed Inuit artists. Known for her drawings, prints and sculptures, she received the Order of Canada in 1967 (elevated to Companion in 1982), was elected to the Royal Canadian Academy in 1974, and holds honorary degrees from Queen’s University (1991) and the University of Toronto (1992). She began to make drawings and sculptures in the late 1950s at the urging of James Houston, who supplied paper and pencils when Kenojuak and her husband, Johnniebo, visited Cape Dorset for supplies. She was the first Inuit woman of Cape Dorset asked to make drawings to be used for printmaking.Kenojuak has participated in most of the annual editions of prints issued by the West Baffin Co-operative. In 1969, she and Johnniebo jointly designed and carved a mural for the Canadian Pavilion at Expo ’70 in Osaka, Japan. Their initial interest in art-making grew from a need to alleviate their family’s poverty. For Kenojuak, it became a central defining activity, bringing her fame in both the north and the south. Kenojuak spent her early years following the “old ways” of the traditional Inuit lifestyle in the areas of South Baffin Island and arctic Quebec. She married young. In her early twenties, she spent four years in treatment for tuberculosis at Quebec City. During that time of separation, her three children died. Kenojuak eventually became the mother of fourteen children, three of whom were adopted, two of whom were adopted out and seven of whom survive. Government assistance was denied to any families whose children were not enrolled in school, so Kenojuak and her family settled at Cape Dorset in 1966. Infirmity in her hands has meant that Kenojuak no longer sculpts, although she continues to draw when she is able. Her prints are characterized by a bold balance of positive and negative space and a complexity of design. Birds and Foliage is one of many works that uses the figure of an owl as its central image. 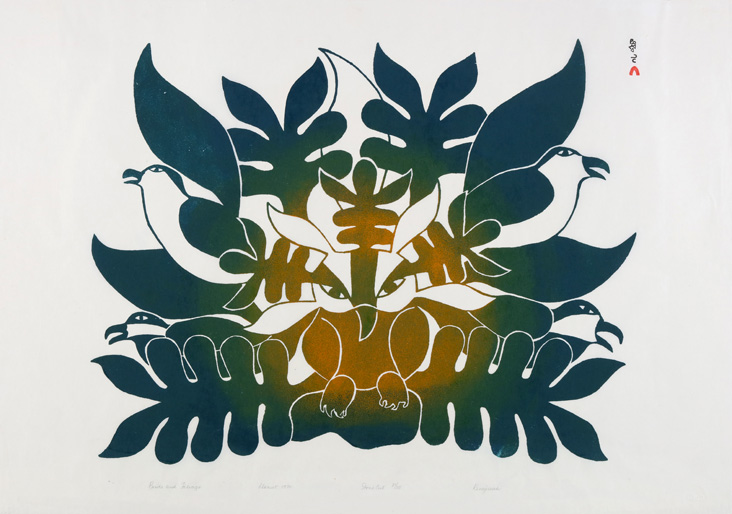