Carl Beam was born of Ojibway ancestory at West Bay, a reserve on Manitoulin Island, Ontario. In 1974 he completed a BFA at the University of Victoria, before moving on to graduate studies at the University of Alberta. His extensive work with media such as painting, printmaking and photomontage; the technical innovation of embedding photo emulsion images became his signature style. Beam’s work navigates the boundaries between contemporary non-Native and Native art; he draws upon and speaks to both cultures. Beam’s work is most important for its critical comments on, and appropriation of, history, especially the history of contact between aboriginal and European cultures in North America. A second sustained theme in his work is the relationship between nature (emblematic of the fragile yet resilient spiritual world) and technology (emblematic of human will to dominate). Beam began his multimedia Columbus project in anticipation of celebrations marking the 500th anniversary of the European “discovery” of the New World. In Columbus Chronos, he combines a portrait of Columbus with an image of bees. In the piece, Columbus can be understood as a symbol of colonialism and oppression, while the bees may be interpreted as either representing the spirit of cooperative endeavour or as a dangerous swarm. 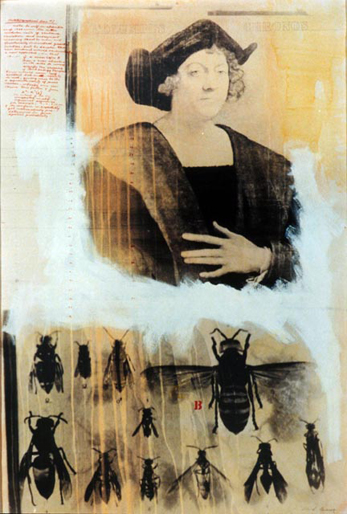