Tuesday 20 April
11°C and Scattered Clouds
Agnes will remain closed in compliance with the province-wide lockdown to curb the spread of COVID-19. All online programming will continue as planned.

“The image is the whaling scene and telling a tale. Whales and bears and other animals turn into humans in Inuit mythology. It is depicting an Inuit myth even though I have not witnessed anything happening like that in real life.” Napachie Pootoogook in an interview with Odette Leroux, 1991, quoted in Inuit Women Artists: Voices from Cape Dorset, p.137.Napatchie is the daughter of famed artist Pitseoloak Ashoona. Napatchie and her siblings were raised by her widowed mother in difficult conditions. She settled in Cape Dorset in the early 1960s and began to draw at the suggestion of James Houston. In the course of some thirty years, she has had forty-two prints published by the West Baffin Co-operative. Her husband, Eegyvudluk, is also a printmaker. In her early work she frequently depicted scenes of traditional Inuit life and incorporated Inuit myths into her images. Eskimo Sea Dreams demonstrates the solid forms and strong use of contrasting positive and negative space found in Napatchie’s early work. The whaling scene makes reference to Inuit myths of animals taking on human form. More recently, she has been exploring social issues faced by Inuit communities, including substance dependencies, physical abuse and suicide. This later work is more linear and naturalistic, with a distinctly narrative focus. The artistic output of Napatchie Pootoogook is remarkable both for its diverse investigations into memory and myth and for its relevance in the ongoing dialogue of contemporary Inuit experience. Napatchie is also well known as an accomplished practitioner of traditional Inuit throat singing and has travelled in southern Canada giving performances. 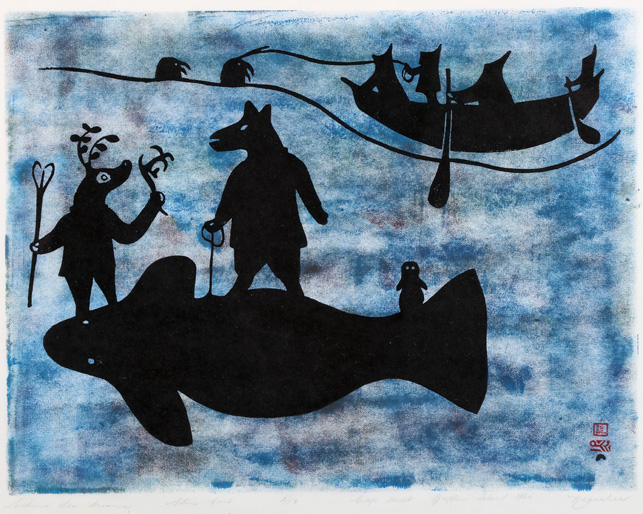