For the Yohure of Côte d’Ivoire, death is viewed as an unnatural occurrence caused by malevolent forces or disharmony. Funeral ceremonies become important opportunities to restore balance, purify the village, and facilitate the transition of the deceased to the new role of ancestor. Masks such as this appear at men’s funerals and are considered to be emblems of deities known as yu. Unlike the creator god, yu dwell in the bush and are active agents in human affairs. Both sacred and powerful, their presence at funerals evokes the spiritual and encourages a smooth transition for both the village and the deceased. The Lang collection mask exhibits the refinement and pleasing interplay of delicate pattern and smooth surface that characterize Yohure style. The “human” portion of such masks is often surmounted by different motifs; here, the curving horns suggest the antelope, an animal of the bush where the yu dwell. Its rich black patina is most often associated with the lo group of masks, which are used only at the funerals of mature men. Masks similar in form but often brightly painted comprise the je group, which appears at funerals of both younger and older men. Considered dangerous, both groups of masks are kept outside of the village and women are prohibited from seeing them there or in performance. 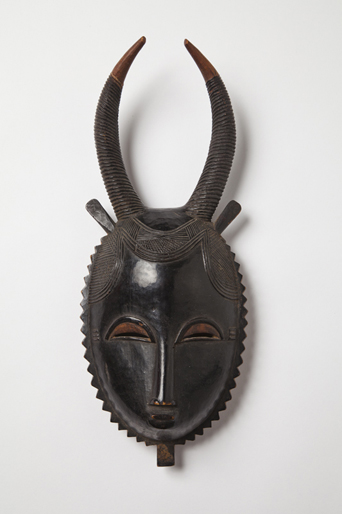