One of only two works in the Lang collection attributed to a known artist (see also M84-214), this impressive sculpture was carved by Ogunwuyi, in the town of Ila-Orangun, around 1928. Little is known about him, other than he was a member of a family of master carvers.The work depicts a devotee of Shango, the Yoruba god of thunder, and its original location would have been in a shrine dedicated to that deity. Kneeling in supplication, the woman supports a large bowl that would have contained Neolithic celts, or stone tools, that symbolized the thunderbolts hurled by Shango. The small male and female figures on the base are miniature worshippers who hold the deity¿s drum and rattles.In Yoruba cosmology, the world of the spirit (orun) is occupied by 401 deities (orisa) and the ancestors (ara orun). Aye is the realm of living beings, humans, animals and plants. Oral history says that Shango was an early king of the Oyo empire, which dominated Yoruba life from about 1680 to 1830. After his death, Shango was deified as an orisa, of unpredictable character, capable of creating thunderstorms and hurling lightning bolts at those who do not respect his authority, yet also ensuring fertility and protecting twins. Thus the large bowl carried by the worshipping woman serves as a metaphor for her womb. 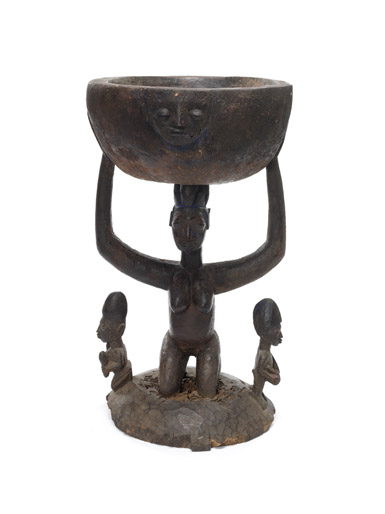