Thursday 17 June
23°C and Clear Sky
Agnes will remain closed in compliance with the province-wide lockdown to curb the spread of COVID-19. All online programming will continue as planned.

In his prints, Noboru Sawai combines Western and Eastern techniques and subject-matter, reclaiming known images and re-presenting them in a way that provokes a response in the viewer. Sawai was born in Japan, but has lived in Canada since 1971. In his work he frequently uses the Japanese colour woodcut technique and the Western technique of engraving within a single work. He works from known imagery, often erotic, and juxtaposes subjects that speak to certain historical cultural values. In Funeral, Sawai makes reference to Gustave Courbet’s celebrated Funeral at Ornans of 1849. In the clouds, above the village funeral procession he includes an image of the union of the Hindu god Krishna and his human consort Radha. Sawai’s works, while not pronouncing judgenment, investigate differing ways in which life, specifically sexuality, and death are approached in the East and the West. 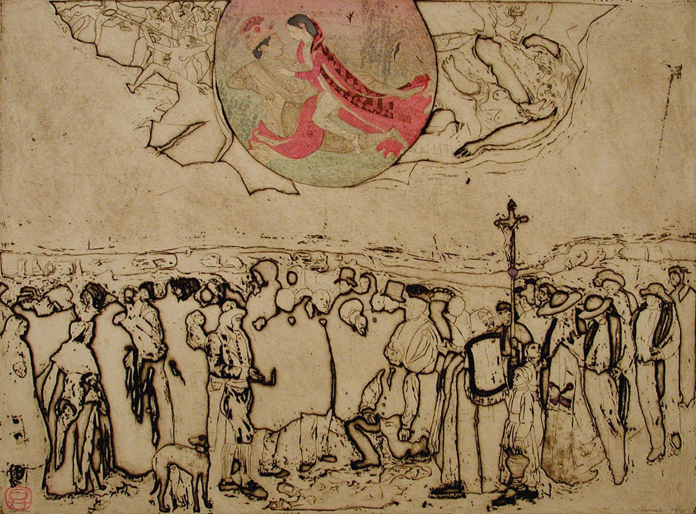