A pioneer couple cuts a swath of ripe grain through a seeming impenetrable Canadian forest, while contented cattle look on from their enclosure. Hard work is paid off by plenitude. The painting indulges in the romantic idealism of the first half of the twentieth century when, through image and text, there was a push to construct and promote Canada’s history as one of triumphant colonial expansion and nation building. Yet here the forest seems to be waiting to return. Despite the painting’s glow of nostalgia, Muskoka farming was a largely unsuccessful venture that eventually gave way to the leisure industry.Clean shadows, crisp complementary colours, and a well-defined composition (with historical farming implements “on display”) reveal the artist Fred J. Finley’s talent as an illustrator and muralist. After serving in the Australian Expeditionary Forces during WWI, Finley studied at the Sydney Art School under Julian Ashton (1919-1920) and at the Académie Julian, Paris, under Paul-Albert Laurens and Adolphe Déchenaud (1920-1923). In 1925, he immigrated to Toronto, where he worked as a commercial artist first for Brigdens Ltd. (1926-1938) and then Baker-Ashdown (around 1940-1945), before becoming Director of Advertising and Design at the Ontario College of Art (1946-1960), a position he held until retirement. Best known for his representational work, particularly paintings of how he envisioned life in Canada’s past, Finley also illustrated nine historical novels for young readers between 1947 and 1967. 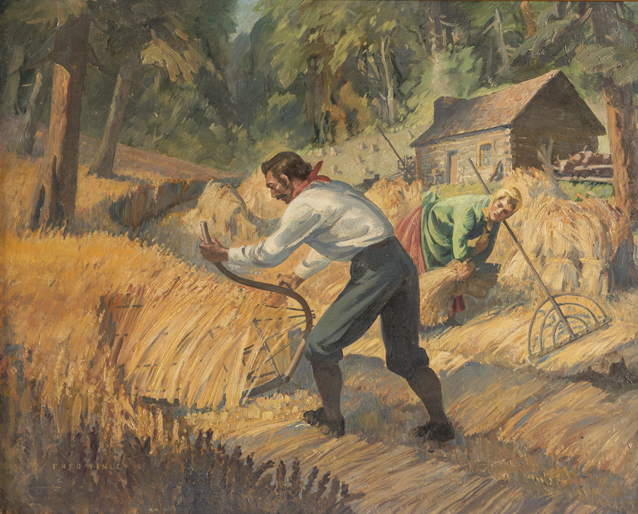