Light falls on an old man from behind, brilliantly illuminating his white turban and shawl. His head and shoulders appear in profile to the right, and his face is dimly lit by a light source from that side. Rembrandt painted this small panel as a study for two figures, a rabbi and a mohel, in his 1661 painting, The Circumcision, in the National Gallery of Art in Washington. By this time late in his career, after suffering bankruptcy and declining status and popularity, Rembrandt had moved toward a thoroughly painterly handling, while continuing to express profound drama and emotion in his work. In this dazzling performance, deft strokes of thick impasto paint in the turban and shawl at once evoke light, form and texture. The locks tumbling out from under the turban are more broadly defined, while a flurry of strokes captures the wiry texture of the beard. The face, with finely controlled middle tones, conveys meditative focus in the lowered eyes and furrowed brow. Small in scale, this study demonstrates uncompromising robustness and grandeur in its effect. 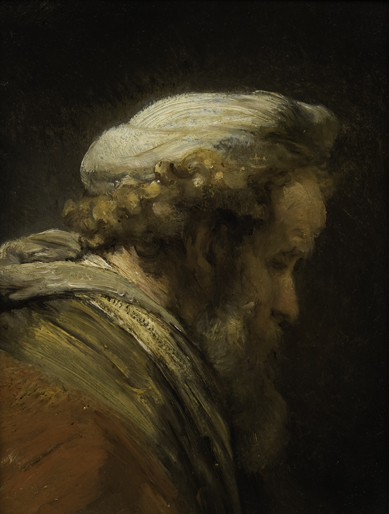