Illuminated directly from above, an elderly man with a furrowed brow and downy beard inclines his head thoughtfully. His dark eyes are open, suggesting an active inner life. This tronie exemplifies the distinctive character studies that Rembrandt and Jan Lievens pioneered together in Leiden in the late 1620s. Divested of narrative attributes that would link them to specific tales from mythology or the Bible, such tronies became important vehicles for the exploration of light, emotion, costume, and the particularities of the human face in the early 17th century. Here, Rembrandt’s soberly clad, aged figure is bathed in a spiritual light, personifying the piety and sagacity accumulated over the course of a lifetime. The manner in which the artist applied paint to the panel characterizes his early style: thick, unblended strokes articulate the wrinkles of the forehead and the folds of the nose, while scratches made into the paint with the butt-end of the paintbrush convey the individual hairs that make up the eyebrows. The monogram at the upper right “RHL” for “Rembrandt Harmenszoon Leidensis” signals the artist’s assessment of the painting as a completed work of art. 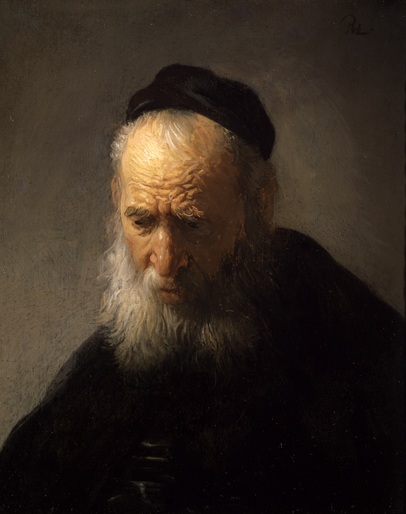