Commissioned by the Sande society, a powerful Mende women’s association responsible for female education, this mask represents the guiding spirit of Sande. It is called sowei or ndoli jowei (“the Sande leader” or “the expert leader who dances”) and is worn exclusively by women, a rarity in African masquerades. Sowei maskers appear at ceremonies such as important funerals, but are most publicly visible during girls¿ initiation into the Sande. Cloaked in dark raffia costumes and wearing sowei masks, high-ranking Sande leaders inform the community of the girls’ progress and perform at the conclusion of the girls¿ education to celebrate their transition to womanhood. As manifestations of the guiding spirit of Sande and potent role models, the masks reinforce what the initiates have learned and codify community values.The Lang sowei mask displays typical Mende conceptions of idealized female beauty and exemplary character. The high forehead and neat, elaborate coiffure are desirable feminine attributes. Black pigment is applied to most masks; the polished dark surface is a sign of healthy skin. The reserved facial expression, with its narrowed eyes and composed, half-smiling mouth, reflects the poise and self-control the young women are expected to assume. Ridges at the base of the mask reference its spiritual origin from the rippling water. Attributes such as the curved horns (associated with protective medicine) and a bird (seen as an emissary between two realms), both of which appear on this mask¿s coiffure, further emphasize the spiritual power associated with Sande. 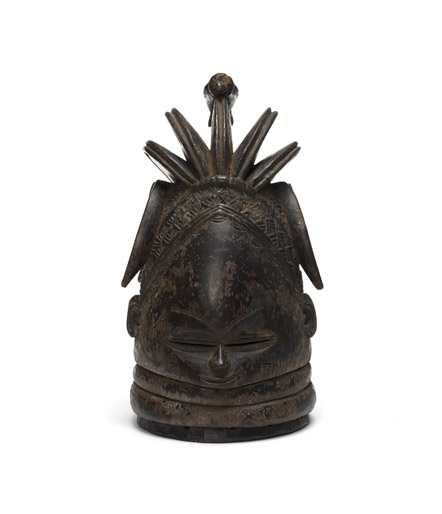