In Africa, masks are not seen publicly except in performance. The ritual of the masquerade, which includes costumes, music, dancing and movement, is traditionally a vehicle for connecting with another world. The masker’s role is to manifest a spirit, usually the spirit of nature or of ancestors, to effect positive change in the community. Exposure to western culture, however, has influenced the original functions of masquerades, often changing them from spiritual to more secular purposes.Among the Songye, kifwebe masks are made by an initiation society associated with healing and mystical control. Initiates learn the secret names for every aspect of the mask and costume. This mask exhibits male characteristics that include red, white, and black painted designs, and a centrally projecting crest. Extending above the crest at the rear is a conical shape, wrapped in burlap and topped with feathers, while a textile formed of knotted rope, somewhat like a net, drapes down the back.This mask was donated to the Art Centre from the collection of Jacqueline Fry (1923-1991), a noted French specialist in African art and friend of the Langs. 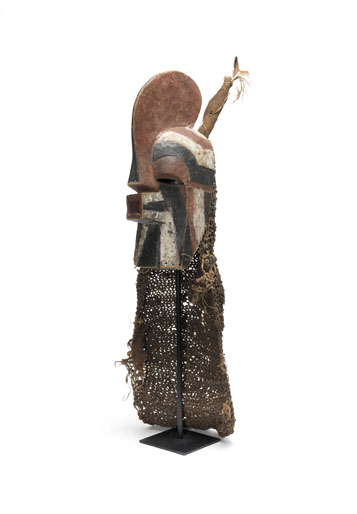