Edwin Holgate is best known as a member of the Group of Seven, although he joined the Group only in 1931, two years before they disbanded. As a young man, Holgate studied with William Brymner at the Art Association of Montreal for two years and at the Académie de la Grande Chaumière in Paris. Luxembourg Gardens, Paris dates from his first visit to France and is an example of Holgate’s early work. During the early 1920s, Holgate was a member of the Montreal-based Beaver Hall Group. Later, as a teacher, first at the École des beaux-arts in Montreal, and later at the Art Association of Montreal, Holgate instructed several artists of future renown, Jean-Paul Lemieux and Paul-Émile Borduas, among others. Holgate was particularly well known for his paintings of figures in landscape and of portraits. As a war artist attached to the RCAF during World War II, he painted a distinguished series of portraits of flying officers. 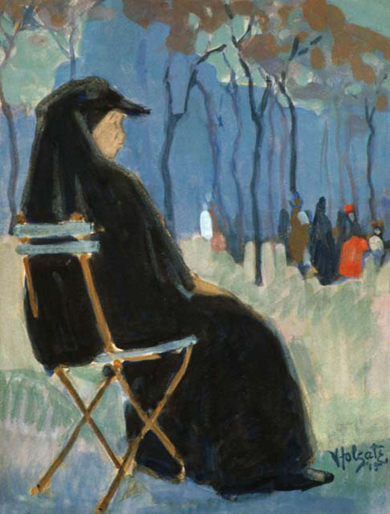