This stone sculpture by the Zimbabwe-born Kingston-based artist Chaka Chikodzi was created in 2016 in response to the Lang Collection at the Agnes Etherington Art Centre. Chikodzi was invited to participate in Stories to Tell: Africans and the Diaspora Respond to the Lang Collection by its guest curators Mark Epprecht and Allison Goebel. Chikodzi chose to create a new work in response to Figure of a Bowl Carrier for Shango (Arugba Shango) by Ogunwuyi, one of only a handful of identified African artists represented in the Lang Collection. In making this choice explicit, he not only points to one of the complexities of Western collections, but also reaches across time to recognize aspects of his own condition in a counterpart who would have been working in the early twentieth century. As the work’s title, a Shona proverb that sometimes appears as “I am because we are,” suggests, we become human by recognizing the humanity of others, recognizing the humanity of our ancestors and our eventual status as ancestors. He has described his intervention into the geological time of stone material as enabling him to travel through time and, in-turn, to be recognized in his humanity by future people. The sculpture reflects an understanding of shared humanity through its depiction of faces forming a continuous surface. The multiple faces bearing inward or mournful expressions form a shape that resembles a cloud or a mass of a tree extending down into a stem conveyed by a veritical ridge of stone that seems to suggest a raw and unpolished trunk illustrated by a passage of variegated texture and colour. 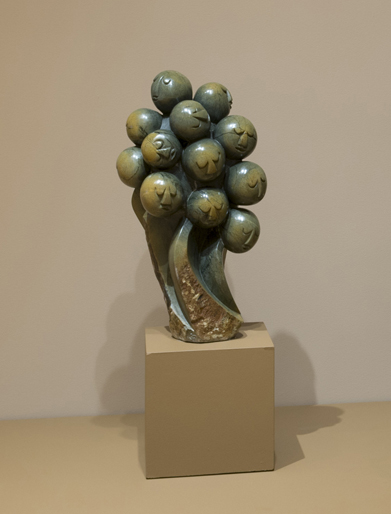