Pitseolak was born on Nottingham Island in 1904 and, until she moved to Cape Dorset in the 1950s, lived a traditional semi-nomadic life. As a teenager, she married the hunter Ashoona and eventually bore seventeen children. Five lived to adulthood. Ashoona died on one of their summer trips inland to hunt cariboo. Pitseolak struggled to provide for their children and, after settling at Cape Dorset, was pleased to be able to earn money from drawings sold to James Houston at the West Baffin Co-operative. She eventually produced over 7,000 drawings and, from 1960 to 1984, 233 of these were translated into prints to be sold in the south. Her work met with immediate success. She was elected to the Royal Canadian Academy in 1974 and received the Order of Canada in 1977. Pitseolak achieved a considerable reputation both nationally and internationally. Among southerners, Pitseolak is remembered as an outstanding artist who chronicled the “old ways,” the traditional Inuit way of life that she had known from personal experience. Among the Inuit, she is also remembered as a kindly, laughing woman who had endured hardship, a seamstress skilled in appliqué and embroidery, as well as a gifted printmaker. The majority of her work takes its subject matter from life on the land, activities such as hunting and fishing, remembered from earlier days. Netsilik River depicts a camp used by Pitseolak and her family, abundantly populated by fish, seals and geese. In 1971 she produced a book with Dorothy Eber with drawings and stories entitled, Piseolak: Pictures Out of My Life, which was subsequently made into a film produced by the National Film Board of Canada. Four of her children have become artists, including prominent graphic artist, Napatchie Pootoogook. 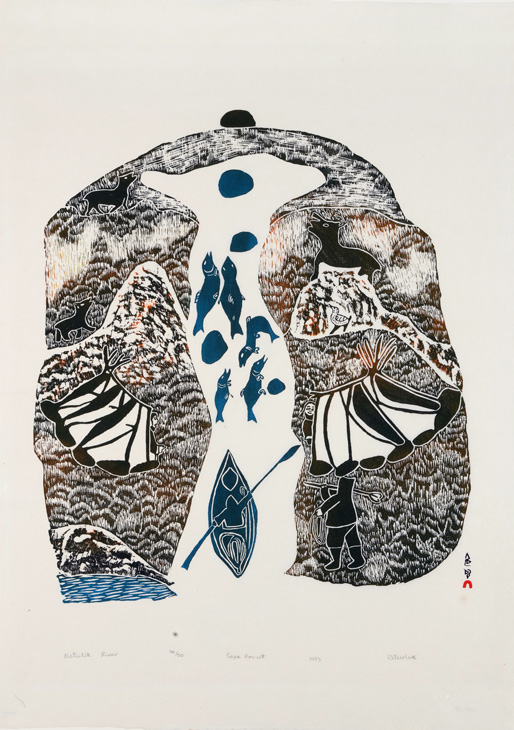