Andromeda, daughter of King Cepheus and his wife Cassiopeia, is chained to a rock to appease a sea monster wreaking havoc upon the Aethiopian coast. The tale, told in Ovid’s Metamorphoses (IV:666–759), articulates that Andromeda’s sacrifice is precipitated by Cassiopeia’s boast that she and her daughter were more beautiful than the sea nymphs known as the Nereids. In the distance, Perseus raises his spear to slay the sea monster, but the vulnerable Andromeda draws the viewer’s attention to the foreground. Andromeda displays a dynamism and vigour in her pose that intimate less terror than restlessness at the ensuing battle. 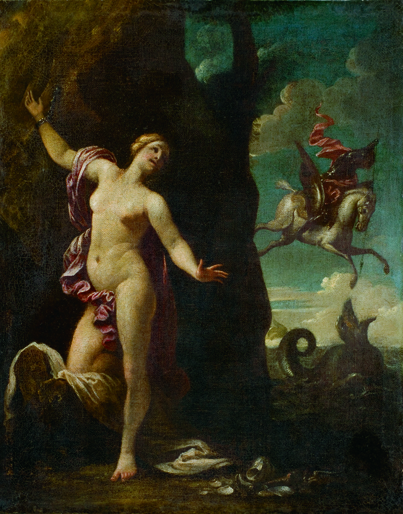