Wednesday 27 January
-7°C and Broken Clouds
All online programming will continue as planned.

Exhibition TextThe many portraits of Restoration female sitters (many of which remain unknown, as is the case here) offer the best testimony to the new social, political and sexual power of women in England in the second half of the seventeenth century. The sitter’s face and upper body are powerfully lit by an unidentified source of light, revealing her soft skin tone. A lock of her hair winds around her right shoulder further accentuating her pale bosom.- Dr Maxime Valsamas, Curator of From Tudor to Hanover: British Portraits, 1590–1800Curatorial Summery John Closterman trained with his father in Osnabrück, but in 1781, he journeyed to England and worked for the portrait painter John Riley. During his time there, he worked for the Duke of Somerset and traveled to Spain and Italy under the patronage of James Stanhope (1673-1721) and Lord Ashley (1671-1713). He would eventually return to England after fulfilling his dream of seeing Rome. Documents show that in 1697, he painted for the Lord Chamberlain and the dukes of Somerset and Marlborough. His last portrait is dated 1704, and he seems to spent the last decade of his life as an art dealer.In the tradition of Lely, Closterman situates this unidentified woman in the whimsical garb invented by Anthony van Dyck and frames her with an illusionistic carved frame. Her gaze is confident and playful, suggesting her awareness of her beauty and youth. In her seductive expression and voluminous curls, she embodies elegance and splendour, the ultimate qualities of the 17th-century noblewoman. 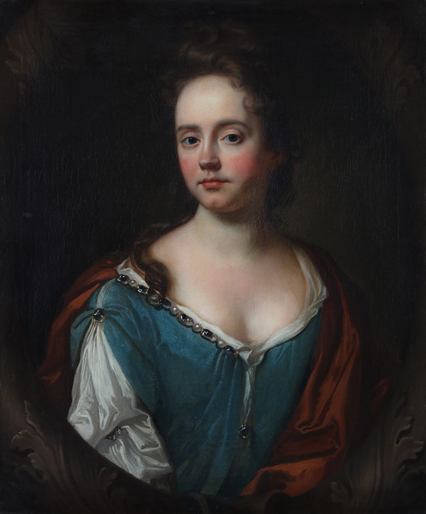