A man wearing a black notched beret and striped brown doublet is shown in three quarter-length with both hands on his hips. Though the subject in this painting of 1658 is unknown, his dark hair may indicate a traveller from the Mediterranean. Rembrandt executed at least one painting for an Italian patron in the 1650s, and this may be an instance of a portrait commissioned during a brief stay in Amsterdam. Regardless of the man’s origins, his authoritative pose and confident gaze point to a powerful personality. Equally remarkable is the application of paint: the artist has executed the doublet through long strokes laid in with a stiff brush. Flattening form in an almost modern manner, these strokes imbue the costume with a lively texture typical of the artist’s late “ruwe,” or rough, style. The man’s face, however, displays the attentive energy associated even with the artist’s earliest likenesses. This portrait, a grand statement on the power of the human face and the act of painting alike, demonstrates the artist’s supreme ability late in his career. 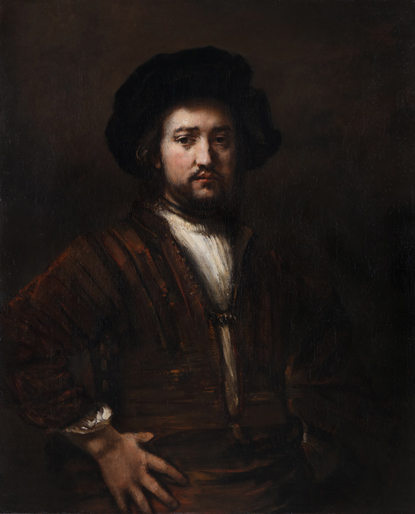