Herman Verelst was one of three sons, all of whom became painters, of the genre painter Pieter Hermansz. Verelst. Born in either The Hague or Dordrecht, Herman joined the painter’s guild in The Hague in 1663 and was active in Amsterdam, Ljubljana, Rome and Vienna before settling in London in 1683. Continuing the family dynasty, his children Cornelis and Maria both became painters. He died in London in 1702.This portrait has only recently been attributed to Verelst, based on a newly discovered signature and stylistic comparison. While his early work reflects the conventions disseminated by Rembrandt’s students Govert Flinck and Ferdinand Bol around 1650, Verelst’s later portraits reflect the manner established by Anthony van Dyck’s elegant representations of English aristocrats in the 1630s. Here, the “careless romance” of the white ruffled chemise and blue gown, the cascading curls framing her face, and the alluring decollete emphasize the young woman’s physical beauty, while the landscape and draped red curtain in the background contribute to the atmosphere of splendor. 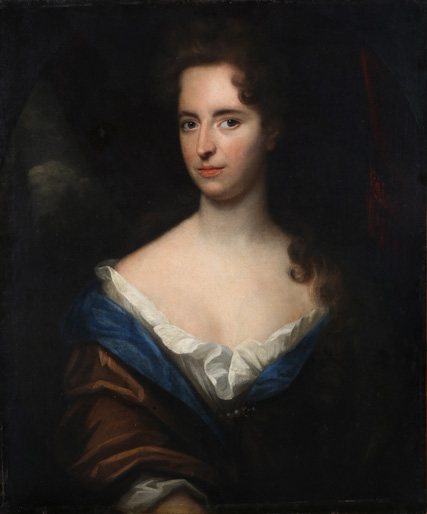