< Visit Hours and Admission Getting Here Accessibility Group Visits Visitor Policies Facility Rental and Floorplan
< Explore Exhibitions Collections Indigenous Contemporary Canadian Historical European Historical African historical Historical Dress and Quilts Search The Collection Publications Residencies and Fellowships
< Participate Talks, Tours, Events Classes, Workshops, Camps Academic Outreach School Programs for Grades 1–8
< Connect About Agnes Join and Give News and Stories Opportunities Contact
< Digital Agnes All Digital Exhibitions and Publications Collection Highlights Interactives Audio Videos
Visit > Explore > Participate > Connect > Digital Agnes > Search
< Return to Previous Page
Lismer, Arthur
Quebec Village (Saint-Hilarion)
1926
Quebec Village was painted from sketches made during an expedition with A.Y. Jackson and ethnologist Marius Barbeau to the region of the lower St. Lawrence River in August 1925. Lismer and A.Y. Jackson visited several Quebec villages that summer, including the one depicted in this work, Saint-Hilarion. The painting was exhibited for the first time at the Group of Seven exhibition held at the Art Gallery of Toronto in 1926 that coincided with the exhibition "Art in French Canada." In a letter to H.S. Southam written in 1949 Lismer recalled the "critical ribbing" the painting received on account of the distinctive halo surrounding the church. Lismer claimed it had been misinterpreted by critics as an "aura of sanctity", when in fact it had been an attempt to capture the effect of the vibration of light in the atmosphere on that particular day. The sketch from which it was painted is now in the collection of the National Gallery of Canada, Ottawa. 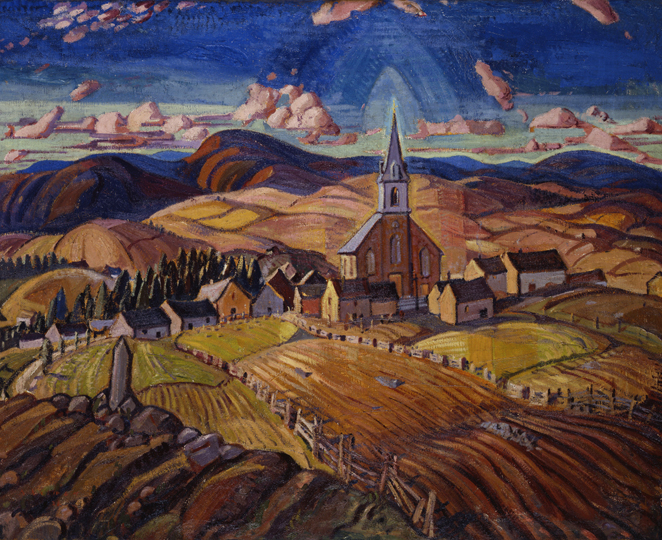