Rebecca Belmore produced this drawing during her tenure as Koerner Visiting Artist in Queen’s University’s Department of Art in 2003. The text is a rubbing taken from the base of the Sir John A. MacDonald monument located in Kingston’s City Park. Across the three sections of the piece, the artist elegantly drops words from successive versions, to shift the meaning from a declaration of the political identity of Canada’s first Prime Minister to emphatic declaration of the inevitable “fact” defining subjective existence.

The original version of the drawing was in the form of a long scroll, which was incorporated in a performance presented by Belmore at the Agnes Etherington Art Centre, a powerful rumination on mortality marking the death of American singer-songwriter Johnny Cash. Belmore also used this scroll ina subsequent performance at the 2003 LIVE Biennial of Performance Art at Western Front in Vancouver. “Quote, Misquote, Fact” is a drawing that spawned a perfomrance; its significance is further shaped by a history of enactment within Belmore’s practice.

Rebecca Belmore is renowned for giving voice to First Nations perspectives through written and oral messages, and their orchestration through performance, audio, video, and sculptural installation. 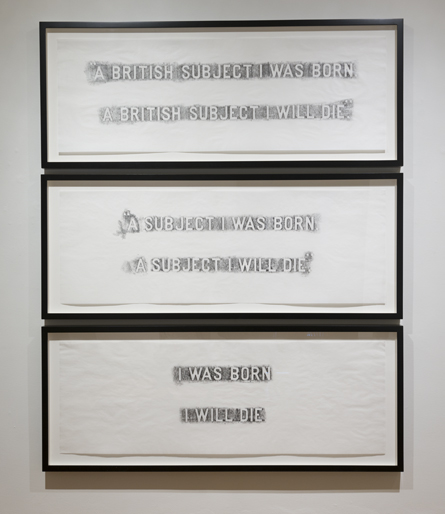