Wednesday 21 April
0°C and Light Snow
Agnes will remain closed in compliance with the province-wide lockdown to curb the spread of COVID-19. All online programming will continue as planned.

Clarence Gagnon is known primarily as a painter of rural Quebec, but he was also an accomplished printmaker. Gagnon was born in Montreal and was taught by William Brymner at the Art Association of Montreal. Financed by collector James Morgan, Gagnon went to Paris in 1904 where he studied at the Académie Julian and at the studio of Jean-Paul Laurens, where it is likely he learned the art of etching. He traveled extensively in France, Spain and Italy, taking etching plates with him. Upon returning to Canada in 1909, Gagnon gave up etching almost entirely, concentrating on painting. Gagnon’s European prints, including Rouen, are characterized by a delicate use of line, a strength of composition, a sensitivity to tonal contrasts, an effective use of negative space and a marked attention to architectural detail. 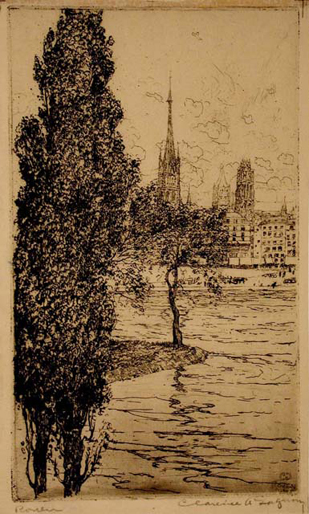