This gift comprises textile objects from various generations of an eastern Ontario family. The “paper skirt” was designed in the house of Jonathan Logan Inc., New York (possibly by Jeanne Carr, who was the designer there in the late 1950s). Jonathan Logan Inc. was a women’s apparel manufacturer known for its classy and dressy designs. Founded in the 1940s by David Schwartz, it became one of the largest ready-to-wear companies in the United States. The date of around 1955 is based on another similar skirt in the Helen Louise Allen Textile Collection at the University of Wisconsin-Madison, with fabric that is heavier than later nonwovens. In the 1950s, synthetic nonwoven `fabrics’ were considered experimental, as the fashion industry adopted products developed by paper and chemical companies for other uses. The trend for disposable paper and nonwoven clothing would catch on in the 1960s as representative of a modern on-the-go lifestyle. The print of this particular skirt might present an interesting intersection with prints in the fine art collection. The original owner of the skirt, Eva Sitton, was born in Williamstown, Ontario, and retired to Kemptville, Ontario, having worked, during her nursing career, at the Royal Victoria Hospital in Montreal, the Hotel Dieu Hospital in Kingston, and the TTC in Toronto. 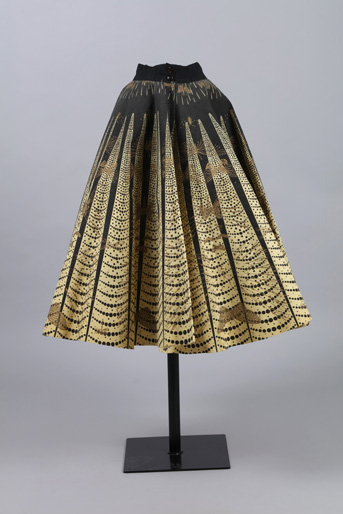 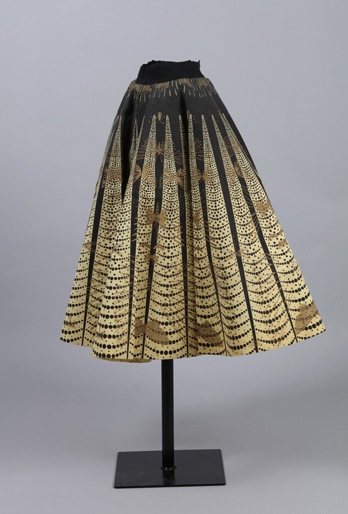 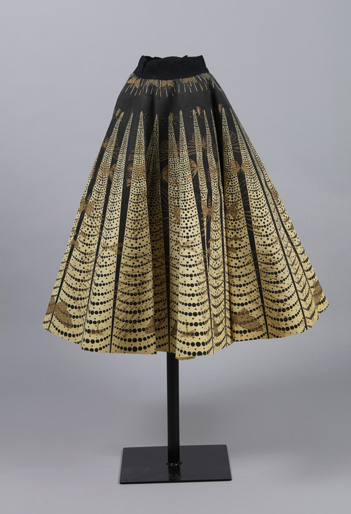