This sculpture of a male and female couple, joined at their hats by a chain, was commissioned for a new member of the Ogboni society. An important group for the Yoruba, it is composed of male and female elders who execute a variety of political, judicial and religious tasks. They serve as judges in serious cases, direct punishment and oversee selection, installation and funerals of kings. Edan Ogboni symbolize the founding couple of a community, the power of the Ogboni society and the need for male-female cooperation.On the left, the male figure holds a sword and pot, while the female carries a bowl. Both wear a chain and medal around their necks and appear to sit on posts. Although called a staff of office, edan Ogboni are not held in the hands but are worn around members¿ necks. Differentiated as to gender in their bodies, but similar in their heads—the source of judgment—edan Ogboni testify to the wisdom of the elders who have earned the right to wear them. 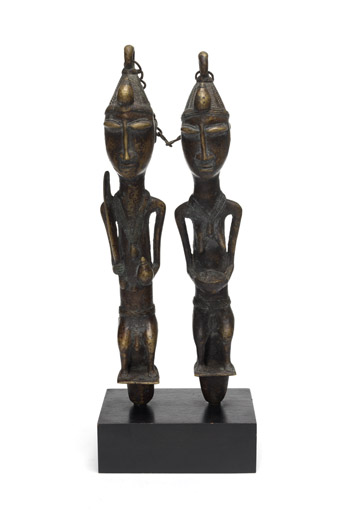