The artist known as El Greco (‘the Greek’) was born Domenikos Theotokopoulos in Crete, which was ruled at that time by the Venetian Republic. Byzantine art continued to be the dominant form of expression in Crete and would have been El Greco’s primary influence before he travelled to Venice in the late 1560s. In Venice, El Greco became aware of the work of Titian and Tintoretto and absorbed the rich Venetian approach to colour and light. He also spent a period of time in Rome, where he studied the work of Raphael and Michelangelo. In 1576 he left Rome for Spain, settling in Toledo where he spent the rest of his life. He is now associated with the “Golden Age” of Spanish painting. Adoration of the Shepherds is an example of El Greco’s small-scale religious painting. It reveals his Venetian experience, and his penchant for ecstatic emotion. Originally it was the left wing of an altarpiece, across from a Baptism of Christ, which recently was rediscovered, and is now in the museum in Herakleion. 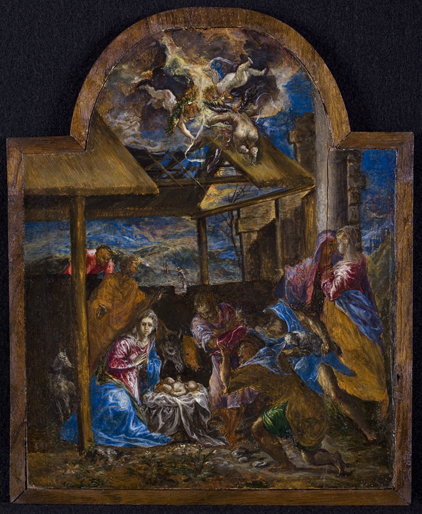