Elisabetta Sirani (1638-1665) is an exceptional example of a female artist of the early modern era. Unlike the women artists in Bologna who preceded her, Sirani specialized in painting subjects from the bible and history, themes at the top of the hierarchy of artistic genres. She was likely trained by her father, Giovanni Andrea, and she would go on to establish an informal art academy that educated as many as a dozen women in the foundations of painting. She executed public and private commissions, and was even visited in her studio by Cosimo de’ Medici, Grand Duke of Tuscany. Upon her unexpected death at the age of 27 years, she was mourned with numerous poems, commemorative music and a grand catalfaque.This rare etching is one of only ten known compositions that Sirani produced in print. In her arrangement of the Holy Family, Sirani privileges female kinship and the domestic environment. She presents the Virgin in the very earthly act of breastfeeding as she entertains the infant St. John. His mother, in turn, is seated behind him, winding swaddling cloth. Joseph, wiedling his axe and a piece of wood, is relegated to the background. The artist uses the platform of the Holy Family to depict a charming image of familial contentment. 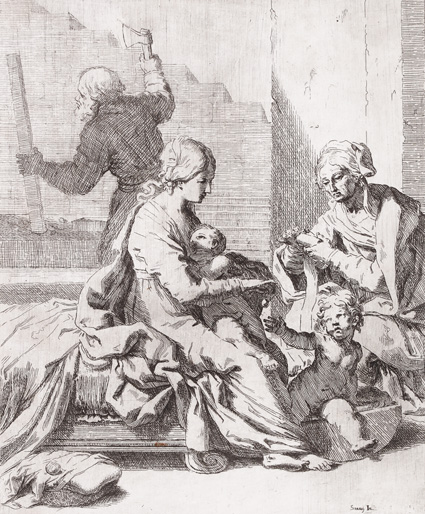