Wednesday 21 April
-2°C and Snow
Agnes will remain closed in compliance with the province-wide lockdown to curb the spread of COVID-19. All online programming will continue as planned.

Jan Lievens began his career at the precocious age of eight, entering the studio of Joris Van Schooten in his hometown of Leiden. Two years later, he went to study under Pieter Lastman in Amsterdam and in 1620 he returned to Leiden as an independent master. From the mid 1620s until 1631 Lievens worked very closely with Rembrandt, a fellow townsman and student of Lastman. The Penitent Magdalene was first attributed to Lievens by Kurt Bauch. It reflects an interest that both Lievens and Rembrandt shared in the effect of strong light on the hands and face and in the sympathetic depiction of old age. Originally this piece was thought to depict the obscure hermit saint Mary of Egypt, however Werner Sumowski has argued that, despite the age of the figure, it more likely represents Mary Magdalene. Lievens’s storied career took him to England in 1632, Antwerp, in 1635, and finally Amsterdam where he settled in 1645. The Penitent Magdalene is a good example of the work Lievens produced at a time when he and Rembrandt were each developing their considerable talents in Leiden. 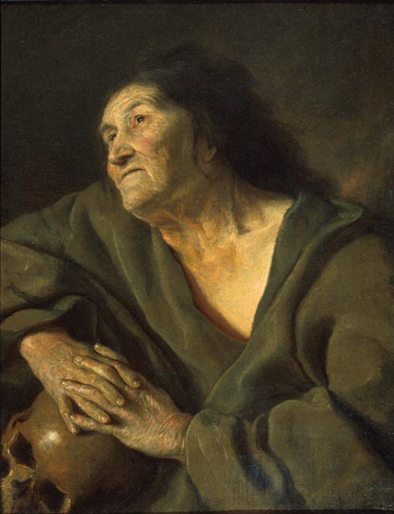