Full-faced, up against the picture frame, Tulip pulsates with unfolding energy. In the 1930s, Montreal artist Marian Dale Scott turned to flowers and plants for subject matter, which launched, as her biographer Esther Trépanier points out, “a major phase of formal exploration.” This series was inspired by Georgia O’Keeffe, whom Scott called her artistic godmother. In these floral close-ups, Scott was fascinated by universal order in microcosm. She also believed that her “growing pictures” were fundamentally feminine. As she later described, “These are maternal pictures, pictures trying to express the wonder of growth.” Tulip contrasts with the urban images that the artist was painting in the same period. It has a life force that could split the concrete of her industrial scenes and cityscapes. In its structure, Tulip anticipates Scott’s 1940s paintings of embryos and atoms, delving deeper into the cellular world.Marian Dale Scott studied at the Art Association of Montreal school, the Monument national and the École des Beaux-Arts before continuing abroad at the Slade School of Art, London. She was active in various Canadian artist societies newly established in the 1930s and 1940s: the Contemporary Arts Society, the Canadian Group of Painters, and the Federation of Canadian Artists. She also assisted Fritz Brandtner in running the Children’s Creative Art Centre, established by Norman Bethune. Socially engaged and successful in her thematic and formal explorations, Scott was one of the most daring modern Canadian artists of her day. 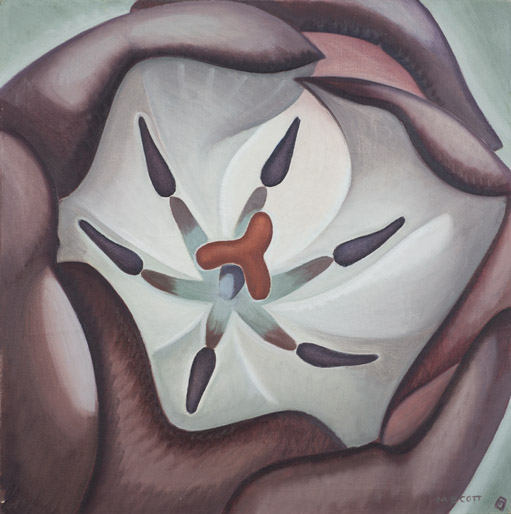