Lamidi Fakeye, artist and teacher, attributed this verandah post to George Bamidele, son of the well-known Yoruba carver Areogun. Fakeye was Bamidele’s apprentice in a workshop in Oye, Ekiti State. This sculpture is one of only two works in the Lang collection attributed to a known artist (see also M84-146). While the names of most traditional African artists might be unknown today, the communities in which they worked always recognized designated persons who had the skills and techniques to create aesthetically dynamic objects for ceremonies, rituals and everyday use.This sculpture of a mother with twins, one at her breast and the other on her back, once had an architectural function as a verandah post of the Ogboni society’s meeting house. One of the most important groups for the Yoruba people, it is composed of both male and female elders, and in the past, functioned as a judiciary and as a check on the power of kings and chiefs. This stately figure’s elaborate hairstyle indicates high birth, as she would not have been able to carry loads on her head. Her bracelet-covered forearms reinforce this status. Working within the confines of a columnar piece of wood, Bamidele skillfully carved an elegant composition that evokes the nurturing power of women. As twins have special meaning for the Yoruba, the sculpture also refers to good fortune, ritual purity and spirituality. Beyond its function as architectural support, the post evokes these enduring values of the community. 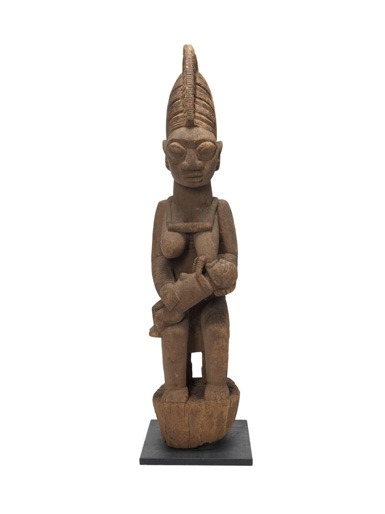