Later, Some Industrial Refugees Form Communal Settlements in a Logged Valley in B.C. is part the 1985-1988 series entitled Work Station. In these pieces, Eleanor Bond explores issues of employment and unemployment as the Western world moves into the so-called post-industrial phase. The paintings offer speculative representations of the future, depictions of the environment of an imagined involuntary leisure class as the successes of technology displace human labour. Despite the humour of hyperbole and the inclusion of the occasional homey detail in the operatic scale of the landscape, the works are unsettling. They are characterized by a vertiginous bird’s-eye viewpoint: in this piece the mobile homes, which Bond envisions as a settlement in a devastated clear-cut mountain terrain, are placed dangerously close to the precipice. Although human presence is implied, Bond excludes actual figures from the work, highlighting the effect of a kind of futuristic blueprint.Born in Winnipeg, Bond studied at the University of Manitoba. Her work has been included in major exhibitions including the Sao Paulo Biennal (1987), the National Gallery of Canada’s Biennial of Contemporary Art (1989), Un-Natural Traces at the Barbican, London (1991), and the Witte de With Centre for Contemporary Art, Rotterdam (1995). A solo exhibition was mounted and toured by the Musée d’art contemporain, Montreal (1998). 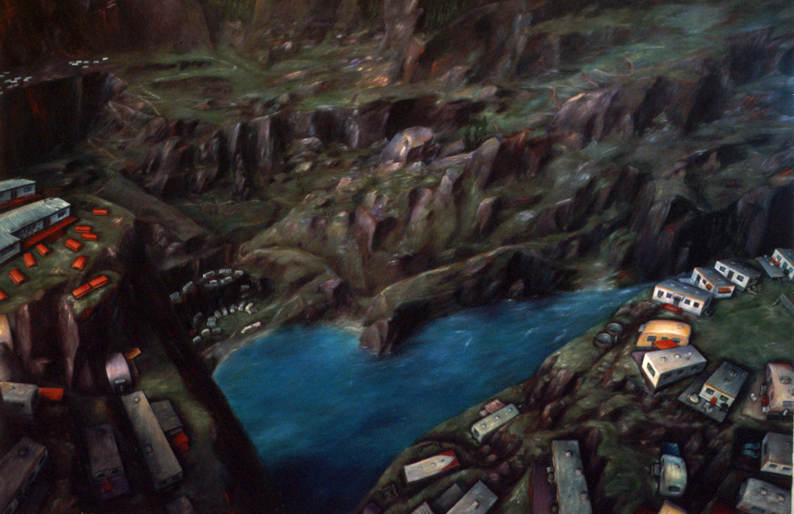