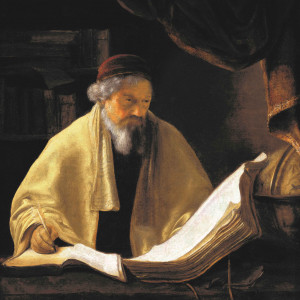 An elderly scholar temporarily pauses for reflection from his writing, his pen slightly raised above the open notebook resting on the table in front of him. Captured mid-thought, he looks off to the side instead of directly engaging the viewer, underlining his dignitas and focus on scholarly pursuits. He wears a shimmering gold mantle, a scarf of the same colour, and a red skull-cap–an accessory commonly associated with scholars and ecclesiastics in the seventeenth century. Light enters the composition from the left, illuminating the large folio propped against the globe in the foreground and revealing the man’s thick, white beard. A curtain at the top of the painting is pulled aside, exposing a small collection of books behind the pensive figure. The warm earth colours, as well as the use of both light and dark passages, tie this painting by Godfrey Kneller (1646–1723) to the artistic circle of Rembrandt van Rijn (1606–1669).

An ambitious artist, Kneller knew that pitting himself against his illustrious predecessors had its merits, all the while producing artistic compositions that had their own distinct qualities.

Born in Germany, Kneller developed his skills as an artist while studying under Rembrandt and Ferdinand Bol (1616–1680) in Amsterdam during the 1660s.1 Kneller was likely a pupil in Rembrandt’s workshop in 1662, and he became a student of Bol’s in the second half of the 1660s. Jan van der Veen, “Rembrandt’s Late Pupils,” in Rembrandt’s Late Pupils: Studying Under a Genius, David de Witt et al. (Amsterdam: Museum het Rembrandthuis, 2015), 23.  As a young artist, Kneller was encouraged to depict wise, old men in scholarly garb by both of his Dutch masters. Older models with creases and wrinkles presented artists with a challenge, and the theme of a scholar in his study was a popular subject throughout most of the seventeenth century.2 The Dutch Republic in the seventeenth century was marked by intellectual freedom, enabling the study of the humanities and sciences to flourish in academic institutions. For more on the visual depiction of scholars during this period, see Volkur Manuth et al., Wisdom, Knowledge and Magic: The Image of the Scholar in Seventeenth-Century Dutch Art (Kingston: Agnes Etherington Art Centre, 1997). Bol, in particular, was fascinated by scholarly figures, and he produced several works in different media related to this pictorial theme.3This list includes: Old Man with a Globe, around 1650, oil on canvas, 122 x 98 cm, The State Hermitage Museum, St. Petersburg; A Scholar in his Study, around 1650–1653, etching and drypoint, 19.5 x 12.7 cm (for example, an impression in the British Museum, London); An Astronomer, 1652, oil on canvas, 127 x 135 cm, The National Gallery, London; A Scholar Meditating in his Study, 1653, etching and drypoint, 22.8 x 18.1 cm (for example, an impression in the Rijksmuseum, Amsterdam); and Scholar with Renaissance Beret at a Desk, around 1650s, pen and brown ink, 17.1 x 13.6 cm, Kupferstichkabinett, Berlin. Kneller and other students would have been exposed to Bol’s drawings and prints of scholars, some of which were available in the master’s studio for pupils to look at and copy as part of their artistic training4Experts believe that Bol produced more etchings than any other of Rembrandt’s pupils. For more on Bol’s graphic output, see Norbert Middelkop et al., Ferdinand Bol and Govert Flinck: Rembrandt’s Master Pupils (Zwolle: W Books, 2017), especially 182–221. For instance, it has been well documented that Cornelis Bisschop (1630–1674), an artist who worked in a Rembrandtesque manner and who was a pupil in Bol’s studio in the 1650s, painted A Scholar in His Study (fig. 1) directly after a drawing made by Bol (Scholar Seated Next to a Table with Books and Globes, Kupferstichkabinett, Berlin).5See Werner Sumowski, Drawings of the Rembrandt School, edited and translated by Walter L. Strauss (New York: Abaris Books, 1979), 498–499. Kneller, for his part, may have been inspired by Bol’s Scholar in His Study (fig. 2), a drawing that bears resemblance to the former’s An Old Scholar painting dating from 1668 (fig. 3). In these two works, similarities can be found in the hats worn by the sitters, their facial features, and in the presence of a skull on the desk in each image. While the Agnes’s A Scholar in His Study painting does not appear to derive specifically from a work made by Bol, Kneller was clearly invested in depicting variations on the scholar theme. An ambitious artist, Kneller knew that pitting himself against his illustrious predecessors had its merits, all the while producing artistic compositions that had their own distinct qualities.

Spiritual gratification is the clear focus of Kneller’s A Scholar in His Study, with its emphasis on the figure’s worldly knowledge and on the contemplative life. Unlike Kneller’s An Old Scholar, in which the skull and the hourglass serve as symbols highlighting the transience of human life, there are no vanitas attributes in A Scholar in His Study. The figure Kneller depicts here hints at the works Rembrandt produced in the late 1650s and early 1660s illustrating the introspective thoughts and emotions of his subjects.6 For instance, it is possible that Rembrandt’s St. Matthew and the Angel, 1661 (oil on canvas, 98 x 61 cm,  Musée du Louvre, Paris), was still in the master’s workshop when Kneller studied under Rembrandt in the early 1660s and that the young artist had it in mind when creating A Scholar in His Study. St. Matthew and the Angel does not appear in any early Dutch inventories; thus, it likely did not leave Rembrandt’s possession immediately upon completion. For more, see Albert Blankert, Rembrandt: A Genius and His Impact (Melbourne: National Gallery of Victoria, 1997), 161–162. Certainly, a parallel can be drawn between the solemn facial expression of Kneller’s scholar and that of Rembrandt’s St. Matthew, and the way in which both men temporarily raise their pens from their notebooks. A remarkable work in The Bader Collection, A Scholar in His Study displays the essence of wisdom and gravitas through its protagonist.