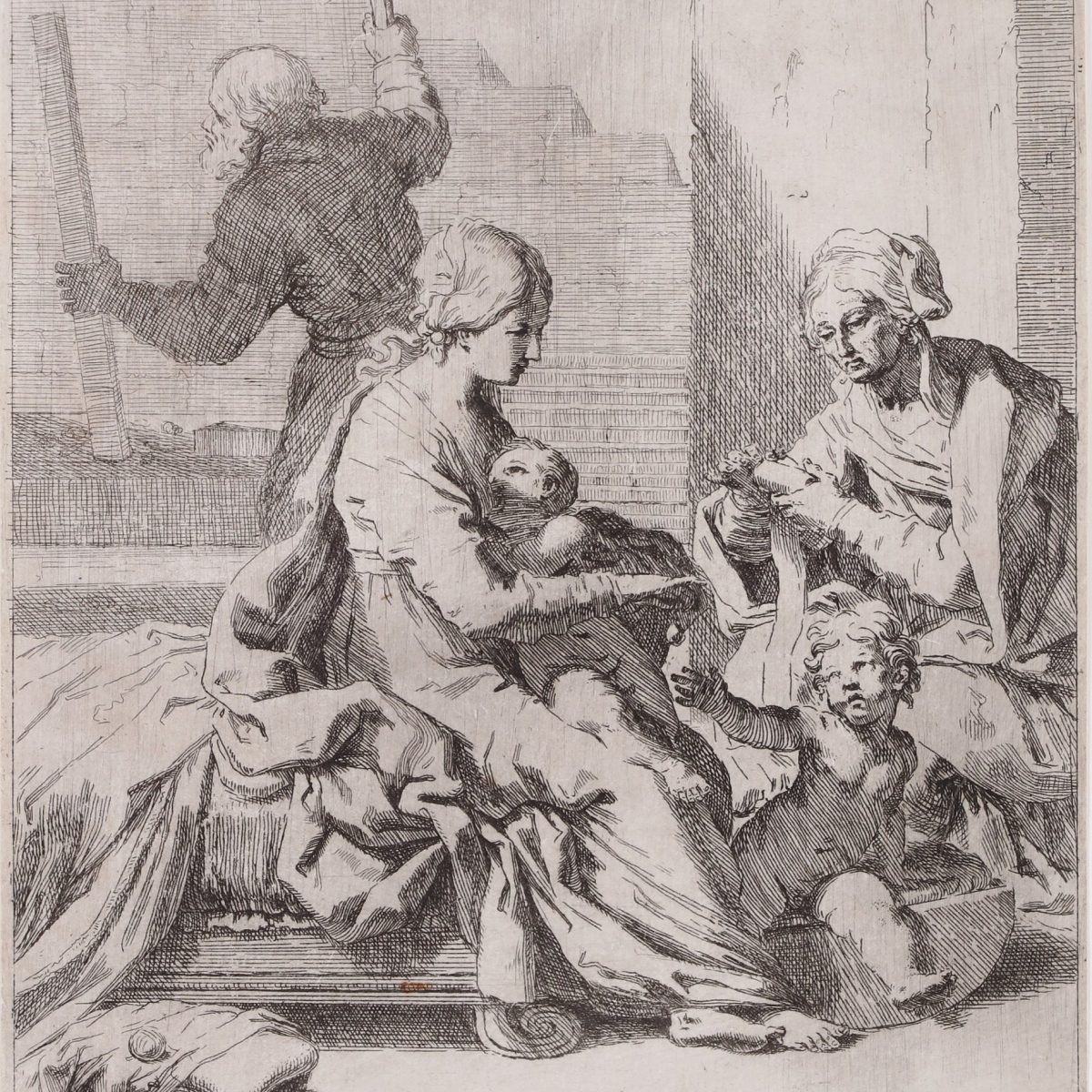 In this print, Elisabetta Sirani (1638–1665) depicts a well-known subject in early modern Italian art: the Virgin Mary and St. Elizabeth with their children Jesus and St. John the Baptist. Sirani approaches the topic in a particularly striking way. As Mary sits breastfeeding the infant Jesus, she offers a toy to the young St. John the Baptist who reaches out to grab the bauble from her hand. Just behind him sits his mother, St. Elizabeth, winding his swaddling cloth. Despite their status as holy figures, the two women are engaged in everyday acts of motherhood that emphasize the tender connection between the women and their children. While Joseph is included, he is relegated to the background, turned away from the intimate moment of the women interacting as he works in the shadows. In the foreground, by contrast, Sirani uses crosshatching to create great tonal variety in the faces and fabrics of Mary and Elizabeth, drawing even more attention to the two mothers.

As a result of her barrier-breaking career, her native city of Bologna saw a flourishing of women artists who were linked to Elisabetta Sirani—some by direct training, but mostly through her inspired example.

Elisabetta had in turn received her training from her father, but her fame quickly exceeded his. Her works also stood out for their unique portrayal of female heroines as active participants in their stories. In Judith with the Head of Holofernes (fig. 1), for example, Sirani focuses on the victorious return of the heroine, rather than the more common representation of Judith as a seductress gaining access to Holofernes’s tent or violently severing his head.

After her father fell ill, Elisabetta, as the oldest child, took up the responsibility of the family studio at the young age of twenty-four. In addition to running the studio of assistants, Sirani secured both public and private commissions in her own right.2Babette Bohn, Women Artists, Their Patrons, and Their Publics in Early Modern Bologna (University Park, PA: The Pennsylvania State University Press, 2021), 57–93. She also continued to train her two younger sisters, Barbara (1641–1692) and Anna Maria (1645–1715), and possibly took on more female students.3A number of female artists working in Bologna have been considered part of a “Sirani school” but given their young age at Sirani’s death it is unlikely that they trained with Elisabetta Sirani. There is a lack of contemporary documentary evidence to indicate if Sirani taught most of her female successors. Despite the absence of such a direct link, it appears that an increased number of Bolognese women were able to pursue a career as an artist based on the precedent set by Sirani’s success. See Bohn, Women Artists, particularly chapter 4, 95–122. As a result of her barrier-breaking career, her native city of Bologna saw a flourishing of women artists who were linked to Elisabetta Sirani—some by direct training, but mostly through her inspired example.4Ibid. See also Adelina Modesti, “‘A Casa con i Sirani’: A Successful Family Business and Household in Early Modern Bologna,” in The Early Modern Domestic Interior 1400–1700. Objects, Spaces, Domesticities, ed. Erin J. Campbell et al. (Farham: Ashgate, 2013), 47–64. In addition to many surviving works by her own hand, her younger sister Barbara Sirani’s Posthumous Portrait of Elisabetta Sirani (fig. 2) provides touching testimony of her enduring legacy after her untimely death at the age of twenty-seven.

Throughout her career, Sirani was aware of the scepticism that her gender might evoke regarding her abilities as an artist. After she took over the studio, Sirani painted in a semi-public setting where visitors to the city could see the great artist at work.5Many accounts exist about the visitors to Sirani’s studio. Her maid, Lucia Tolomelli, said she was expected to welcome guests in addition to her other duties “because many people continually came to watch her paint” and “some ladies were to come to the home, as was usual.” Adelina Modesti, Elisabeta Sirani ‘Virtuosa’: Women’s Cultural Production in Early Modern Bologna (Turnhout, Belgium: Brepols Publishers, 2014), 41 Not relying solely on stylistic recognition, she also signed most of her artworks, as can be seen in the bottom right corner of Judith with the Head of Holofernes. Like the print proudly bearing her name, her signed paintings served to cultivate her reputation and allowed her work to be distinguished from that of her father, despite their similar style.6Modesti, “‘A Casa con i Sirani’,” 47–64.

Through their multiple reproductions, Elisabetta Sirani’s skillful prints allowed even more people to see her work. Artists frequently created or commissioned prints of their paintings to keep as a record within the studio or to promote their talent to prospective patrons. In the absence of a corresponding painting among Sirani’s extant body of work, however, The Holy Family with Saints Elizabeth and John the Baptist could potentially have functioned as an autonomous composition.7While it is possible that this print could correspond to a lost painting, it does not match any of the works listed on an inventory Sirani kept of her paintings, which was published shortly after her death by her biographer Carlo Cesare Malvasia in Felsina pittrice: Vite de’ Pittori Bolognesi (1678), 467–476. While some works by Sirani’s hand have been identified that do not occur on this list, no painting has been found that resembles the present composition While she did not record many prints in her own inventory, they clearly served a unique function in her oeuvre and added to her formidable reputation in Bologna and beyond.