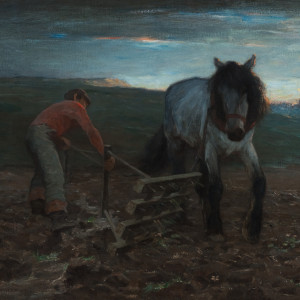 Around the turn of the twentieth century, Horatio Walker (1858–1938) was well known as a prominent and successful artist whose paintings were in high demand by North American collectors. By the beginning of the First World War, however, his work had fallen out of favour. Since then, his oeuvre of over 600 paintings, watercolours, prints and drawings have hung in relative obscurity in collector’s homes and museum vaults. Walker’s painting in the Agnes Etherington Art Centre collection, Turning the Harrow– Early Morning (1898), reflects the story of how tastes in art practice and art collecting have changed over the last hundred years. This work was created at a moment when North American audiences were clamouring for art that was both familiar and inventive; art that fed their nostalgia for the “simpler” times of the past.

Walker was born in Listowel, Ontario, in 1858, to recently immigrated British parents. As a young boy he enjoyed sketching and drawing and soon left home to find work tinting photographs for the Toronto firm Notman & Fraser. While living in Toronto, he received the only artistic training of his career, under the supervision of painter Robert Ford Gagen,1 Gagen had himself been taught by the Canadian artist John Arthur Fraser. Fraser was managing partner of the Toronto branch of the Notman & Fraser photographic firm. See David Karel, Horatio Walker (Québec: Musée du Québec, 1987), 6. and first viewed works by British artists Thomas Gainsborough, John Constable and the revolutionary Joseph Mallord William Turner.2 Doreen Bolger Burke, American Paintings in the Metropolitan Museum of Art, vol. 3 (New York: Metropolitan Museum of Art, 1980), 332. These artists, along with Michelangelo, Jean-François Millet, Jean-Baptiste-Camille Corot and Rembrandt van Rijn would figure as his foremost influences (fig. 1).3 Walker was often called “the American Millet” in the contemporary press. From 1875 to 1885, Walker lived and worked around upstate New York, making frequent trips into Quebec and even Europe. He gradually established himself as an artist of merit whose work sold regularly. In 1883, he signed on with New York art dealer Newman Emerson Montross (Montross Gallery) and by 1885, had settled into a pattern whereby he would spend winters in New York City (the heart of the American art market), and summers in Quebec. In 1888, he purchased a home in Saint-Pétronille on the Île d’Orléans where he eventually constructed a studio.4 Burke, American Paintings in the Metropolitan Museum of Art, 332. He found continual inspiration for his painting among the people and landscape of the island. By the turn of the century, Walker’s work was selling for significant sums and entering major museum collections.5In 1911, the National Gallery of Canada purchased Oxen Drinking (1899) for a record $10,000.

Walker frequently painted scenes around Québec City and the Île d’Orléans, and his desire to both emulate and depict the French-Canadian “habitant” served him well within an art market that favoured depictions of an idealized, bucolic past.

Turning the Harrow – Early Morning is characteristic of Walker’s style and subject matter, which focused on atmospheric pastoral scenes. A lone farmer and his horse stand in a field, labouring by the light of the newly risen sun. Like much of his work, it reveals his abiding, and often rather paternalistic, affection for the culture and landscape of rural Québec, which he first witnessed at the age of twelve after travelling to Wolfe’s Cove (presently Anse-au-Foulon) with his lumberman father. His approach to painting was deeply influenced by the Barbizon art movement, which developed in the mid-nineteenth century around an artist colony in Barbizon, France. The American Barbizon, which gained widespread popularity in the 1880s and 1890s in the United States, emulated the French movement in its more realistic depiction of nature, compared to the idealized landscapes taught by the European Academies.6Barbizon artists were in turn influenced by the seventeenth-century Dutch landscape tradition. Like Jean-François Millet, one of the founders of the Barbizon school, Walker has placed large figures centrally in the composition, silhouetted against the horizon line. The farmer is anonymous, shadowy; detail is sacrificed to free, energetic brushstrokes and a textured surface.7 Dorothy Farr, Horatio Walker, 1858-1938 (Kingston: Agnes Etherington Art Centre, Queen’s University, 1977), 28-29.

Walker frequently painted scenes around Québec City and the Île d’Orléans, and his desire to both emulate and depict the French-Canadian “habitant” served him well within an art market that favoured depictions of an idealized, bucolic past. Despite their Canadian subject matter, his canvasses were best-known in the United States, where collectors could afford their high price tags. However, by the 1920s, larger cultural shifts encouraged people to look to the future instead of the past. The popularity of Walker’s work swiftly declined as styles and approaches popular in the nineteenth century were replaced with more modern art forms. Walker’s work, which was never ground-breaking to begin with, largely faded from the minds and gallery walls of critics and collectors alike. However, his work lives on as a poetic, albeit unrealistic, love letter to Île d’Orléans and provides a window into the approach of an artist who was highly successful during the turn of the century.8There is a second, smaller version of Turning the Harrow – Early Morning in the collection of the Musée national des beaux-arts du Québec, which is quite possibly painted directly onto a photograph of the original. A reproduction of this second version appears in the 1927 book L’Île d’Orléans by Pierre-Georges Roy, and was likely completed for this purpose.