Wednesday 27 January
-6°C and Broken Clouds
All online programming will continue as planned. 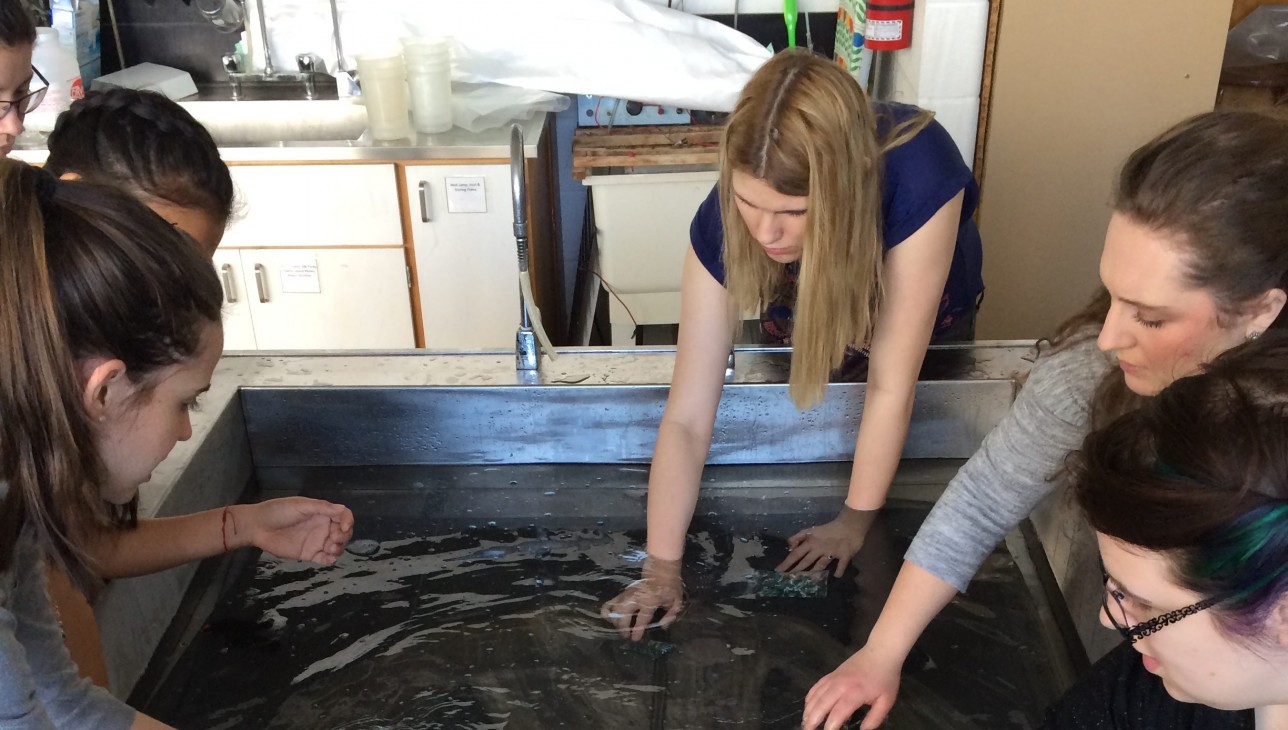 The dress during immersion washing. The Art Conservation students and their professor, Amandina Anastassiades, assisted us with the whole process, helping with the manipulation of the dress, the monitoring of the water, and the agitation of the wash bath.

Details of discolouration on the dress prior to treatment.

The dress was secured between layers of nylon screening and supported on a stretched screen frame so that it could be easily handled during the treatment, and to facilitate rotation when necessary. Here the dress is seen being rotated to allow access to the back during washing.

Throughout the treatment, the pH and conductivity of the wash and rinse water was monitored. The conductivity metre can be seen in the image on the far right, and pH measuring devices are shown in the images at the centre and left. This monitoring helps us ensure that the quality of the water we are using is appropriate for cleaning the aged textile, and also allows us to monitor as degradation products and cleaning detergents are released into the bath.

A reducing bleach solution was applied to the dress in a fine mist prior to the final rinse baths. The reducing agent will lighten discoloured areas as well as help stabilize the oxidized cellulose.

After a long day of washing, rinsing, and removal of excess water, the dress was ready for Gennifer and me to “block it out.” This process involved inserting gentle supports of net and non-woven synthetic fabrics to help the dress retain its shape during drying and to prevent creases.

While one of the main goals of this project is to highlight and preserve historical finishes and traces of cleaning, when faced with the realities of a textile collection it is sometimes necessary to weigh other preservation priorities over those of the fabric’s surface or “hand.” This is precisely the conundrum that was presented to us when we came across a dress made of lace and white organdy (a fine, sheer cotton), dated to 1918–1919, in the Queen’s University Collection of Canadian Dress. In fact, I selected this dress as one of the candidates of study precisely because of the interesting and challenging questions it raised in this context of conservation decision-making.

The dress was donated in 1963 by Clara Brooke(née Farrell), who likely wore it herself, as she would have been 16 or 17 in 1918–1919. I am really looking forward to researching her life and finding out more about her. The dress had been in the collection for some time, and may have been used by the Queen’s drama department. It was severely discoloured yellow-brown in certain parts, although we found that generally these were the parts of the dress that would have been exposed to light during storage. Upon examination, we ruled out water exposure and other forms of staining, and after further analysis by microscopy we deduced that the discolouration could be attributed to photo-oxidation (a gradual process of degradation and discolouration that occurs when certain materials are exposed to light and oxygen over a period of time). However, it is unusual for cotton to be quite so photo-sensitive without undergoing more overall degradation (the non-discoloured areas of the fabric and the condition of the fibres throughout appeared to be in good shape). The nature of the discolouration on the dress (as well as its appearance on small fibre samples when viewed under magnification) led us to believe that it is perhaps a finish or a cleaning residue that has photo-oxidized rather than the cotton itself.

Unfortunately, processes of degradation do not work in isolation, and even if the photo-oxidation can be attributed to a surface finish, this process is nevertheless accelerating the decay of the cotton through the production of acidic by-products. Additionally, the yellow brown colour was extremely disfiguring, and prevented the dress from being understood in its historical context. These factors led us to make the decision to wash the dress, in an attempt to remove the oxidized cleaning residue or finish and preserve the cotton in the long-term. While we strongly believe that these traces of cleaning and finishing are of historical significance to the textile, in their degraded state they were causing harm to the dress overall. We needed to take a comprehensive approach to the preservation of the dress. To do so, we decided to wash the dress to remove acidic degradation products, stabilize the cotton, and improve the aesthetics of the dress, while documenting the historical finish or cleaning residue by taking samples for further analysis and research.

With the tremendous help of Amandina Anastassiades, Assistant Professor, Artifacts Conservation, as well as the many helping hands of the Artifacts Conservation students, we carried out an immersion washing treatment of the dress on 16 March.The process of washing the dress took nearly 11 hours, as it involved initial soakings, the use of a conservation-grade detergent, a reducing bleach treatment, and many rinse baths to ensure we left no cleaning residues behind. Distilled water had to be collected in advance in order to ensure we had enough for the final rinse baths. The pH and conductivity of the wash bath was monitored throughout the entire process. This was done to ensure that the water we were using was of appropriate quality for the washing of an aged textile, but also allowed us to monitor the progress of the cleaning process; for example, monitoring conductivity of the water helped us determine when the detergent we used had been fully rinsed out. At the end of the day, we felt that the lengthy process of washing the dress was well worth it, as we observed an increase in its pH and overall stability, and an incredible transformation in brightness and colour. Furthermore, we were able to ease the dress back into shape during drying, removing harmful and disfiguring crumples and creases. This process gave the dress back its volume and dimension, and left us with a feeling that we were breathing life and air back into the dress, so to speak.