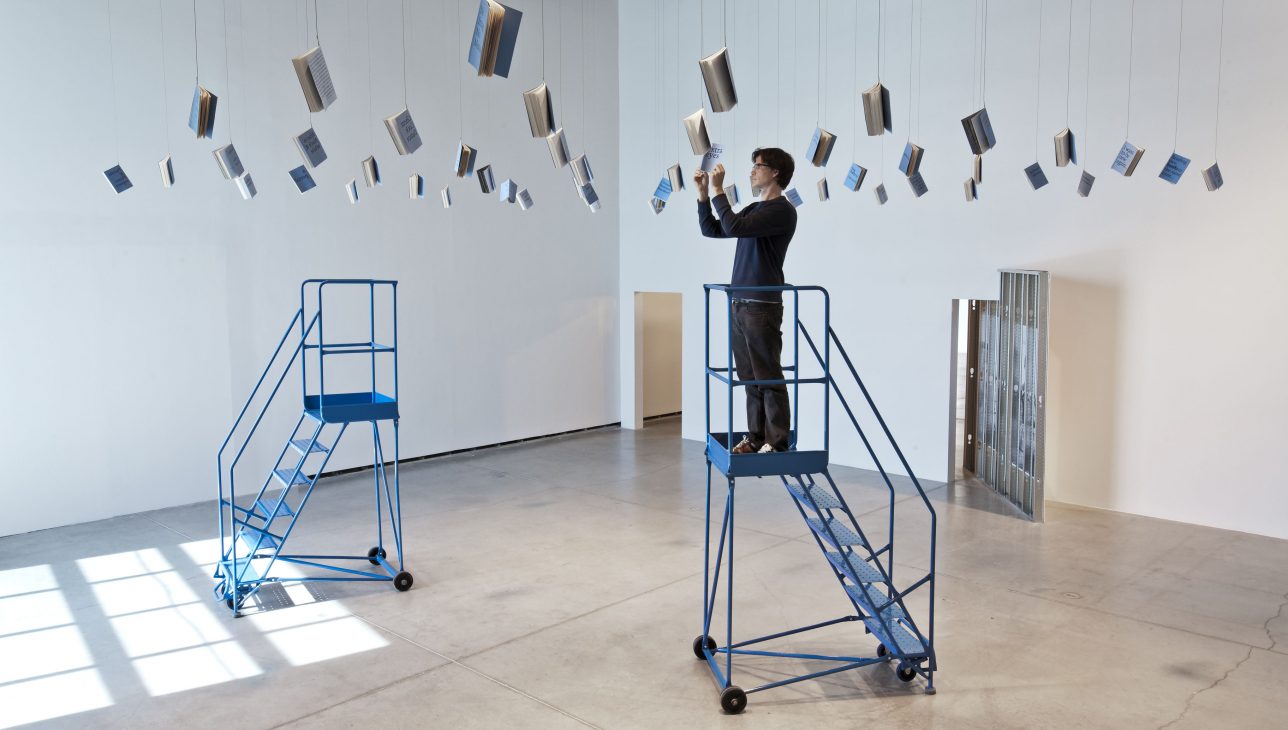 Artist Talk with Derek Sullivan
On “Filling In”

An influential and rising figure with a major public presence, Derek Sullivan is at the leading edge of contemporary art’s enquiries into the legacy of artistic and social modernism. His talk will focus on recent works currently on display in Kingston at the Agnes Etherington Art Centre and Modern Fuel Artist-Run Centre, and contextualize these in relation to his work of the past 15 years.

The Agnes is proud to host this artist’s talk in the glow of Sullivan’s new wall drawing created for the Atrium space in August, 2014. This commission builds upon the gallery’s acquisition of Sullivan’s #32, Le poeme de l’angle droit, Corridor, Folding Stair, an accent misstep. Problems That Arise from Continually Confusing Left & Right retains Sullivan’s handmade aesthetic and conceptual rigor, but also signals a shift in approach, through its monumental scale and considered attention to the site of the artwork. This large-scale drawing is slated to remain on view for two years. Subsequent versions of Problems… will be composed using a template and a set of instructions provided by the artist for this conceptual in situ work.

Four Notable Booksellers (2013), which opens 7 March at Modern Fuel, is comprised of four handmade sculptural units, reminiscent of the second-hand booksellers’ (bouquinistes) cabinets seen along the walls of the Seine in Paris. The selection within each cabinet is a collection of printed materials related to a subject. Each cabinet presents titles that attempt to explore different problems (the problem of expressing emotion, the problems with biography, the difficulty in defining a place and the slipperiness of abstraction) through a range of subjects including defeat/victory in sport, Alan Turing, the recent history of the Toronto art scene, cryptography and the monochrome. Each collection conjures both an absent bookseller, but also imagines the potential reader for those works contained within. Matthew Ryan-Smith wrote this about the piece for Canadian Art:

Sullivan’s work unfolds like any good book should—by establishing a tight narrative, then twisting it unexpectedly. … The books inside have been stripped of their original covers and replaced by Sullivan’s own, often cryptic, visual syntax. … it’s something that speaks to the importance of bookselling, to the idea of circulating knowledge among the public, perhaps because it’s emblematic of democracy itself. The bouquinistes’ role in the French Revolution and resistance movement during the Second World War provides a telling example.

Derek Sullivan (b. 1976) is a Toronto- and Forest Mills-based artist. Last year his work was included in exhibitions at Galerie Emmanuel Hervé (Paris), Galerie Tatjana Pieters (Ghent), Kunsthalle Wien (Vienna), City Art Centre (Edinburgh), Art Gallery of Alberta (Edmonton) and Mendel Art Gallery (Saskatoon). His wall drawing, Problems That Arise From Continually Confusing Left and Right 2014, was commissioned by the Agnes Etherington Art Centre and will be on display in their lobby until 2016. He holds a BFA from York University (1999) and an MFA from the University of Guelph (2002). He is represented by Jessica Bradley Gallery (Toronto), Galerie Emmanuel Hervé (Paris) and Galerie Tatjana Pieters (Ghent).

If you have questions about this event, please contact Cultural Studies Speaks series Research Assistant, Pansee Atta at 6pha@queensu.ca.