Wednesday 27 January
-8°C and Broken Clouds
All online programming will continue as planned. 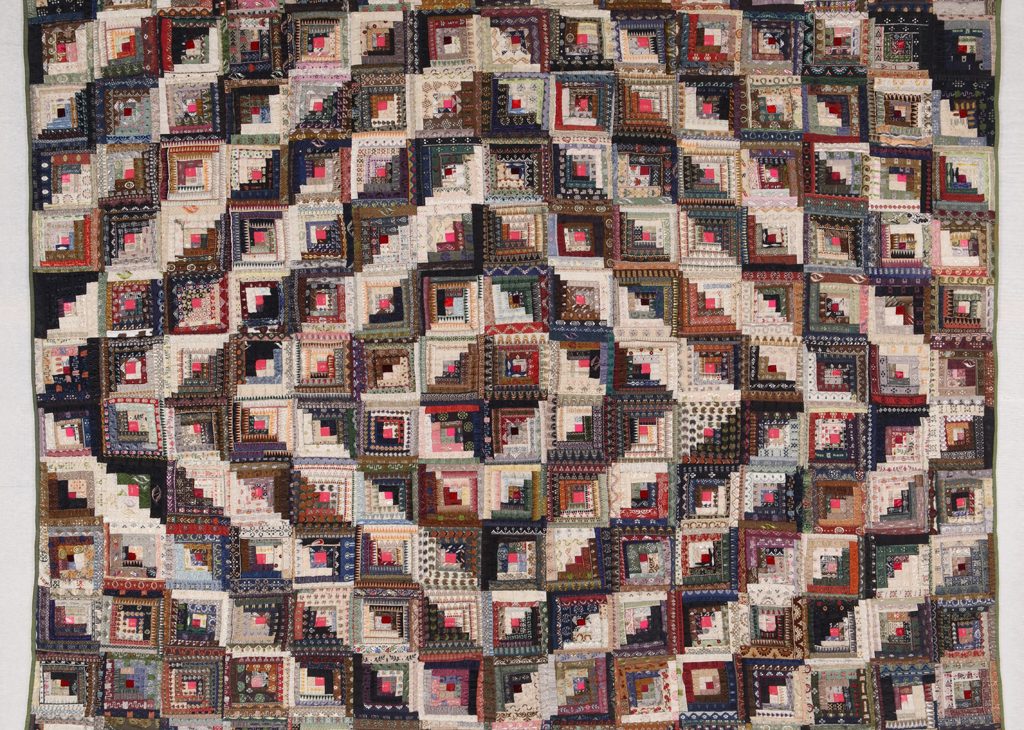 Lisa Binkley will examine the Log Cabin trend in the second half of the nineteenth century and the idea of “decorative utilitarian” quilts as a turning point in quilt-making. Since many women were experienced at sewing household items that required a basic straight stitch, the assembly of Log Cabin patchwork was a fairly easy shift, unlike the more decorative aspects required of appliqué and elaborate quilting. Women were able to enjoy and develop a more creative approach because of greater accessibility to and lower prices of manufactured cloth.

Referencing a quilt on display in the exhibition Log Cabin, from the collection of the Buxton National Historic Site & Museum, Shannon Prince will speak about the importance of quilting to the early Black settlement of Buxton, Ontario. African-Canadian quilting emerged in the decades preceding Confederation. Enslaved Black women were used for spinning, weaving, sewing, and quilting on American plantations. When the first generation of fugitive slave women arrived in Canada—the “land of freedom”—in the 1840s, they brought with them the skills and talents they too would pass down to their children.

Lyla Rye will discuss her Log Cabin installation piece (on loan from the Tom Thomson Art Gallery, Owen Sound), as part of a series of sculptures and installations that she did from 1997. These works sought to question traditional gender roles in relationship to the creation of domestic space, where men were predominantly involved with construction and women with interior decoration.

Lisa Binkley teaches Art History at Queen’s in the Department of Art History and Art Conservation. Her research of Canadian material culture is focused on textiles and needlework made by settler and Indigenous women during the nineteenth century in eastern Canada (forthcoming UBC Press). As part of her work, she has studied several quilts from the Heritage Quilt Collection held by the Agnes Etherington Art Centre. She is also co-editing a volume with Dr Johanna Amos on needlework and identity (forthcoming, Bloomsbury Academic). Lisa is also an active member of the Kingston Heirloom Quilters, Kingston Handloom Weavers and Spinners, and the Cataraqui Guild of Needlearts.

Shannon Prince is the Curator of the Buxton National Historic Site & Museum, Ontario, and a sixth generation descendent from the Elgin Settlement and Buxton Mission, which was a haven for fugitive slaves prior to the American Civil War. She is a graduate from the Museum Studies Program through the Ontario Museums Association; Chair of the National Historic Sites Alliance of Ontario. She is involved in joint UGRR projects with York University, Toronto, The Underground Railroad Freedom Centre in Cincinnati, the Network to Freedom program with the National Parks Service and several other historical organizations. She and her husband Bryan have received numerous awards including YMCA of Chatham Kent’s Peace Medallion and the Underground Railroad Free Press international prize for “The Advancement of Knowledge,” and the Queen’s Diamond Jubilee Medal. She actively farms with her husband Bryan and their four children, and six grandchildren and she enjoys cooking, reading and playing baseball.

Lyla Rye is a Toronto-based artist who began her studies in architecture. She works in installation, sculpture, video and photography to explore our experience of architectural space. After studying architecture at the University of Waterloo for two years, she received a BFA from York University, Toronto, and an MFA from the San Francisco Art Institute, USA. For over twenty-five years her work has been exhibited in galleries and screenings across Canada and internationally including New York, San Francisco, Adelaide (Australia), Auckland (New Zealand), Paris, and Berlin. She has exhibited at The Power Plant, The Whitney Museum of American Art, Southern Alberta Art Gallery, The Textile Museum of Canada and Olga Korper Gallery, among others. She has also done residencies in Berlin, Quebec City, Shelburne and at the Banff Centre for the Arts.