Workshops co-facilitated by local artists and arts professionals and geared towards emerging, mid-career and student artists and curators 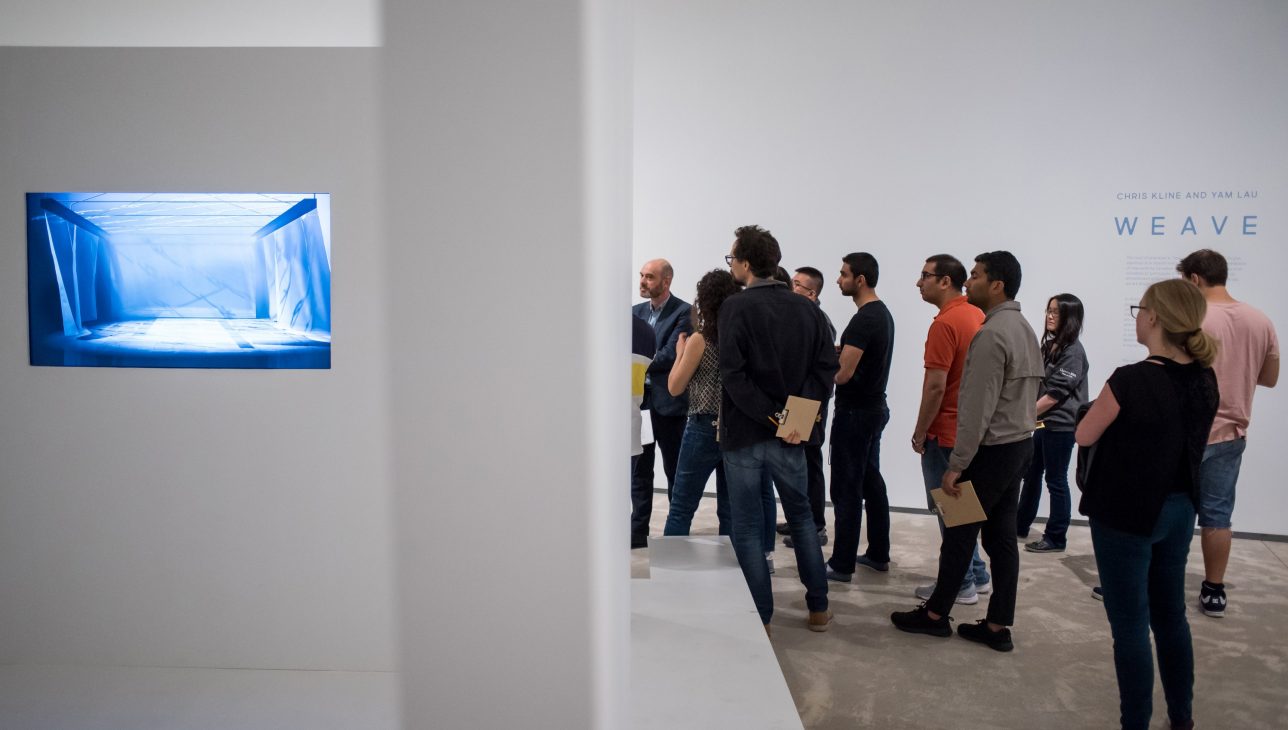 Sunny Kerr talks about the ways artists create languages of process and form in the Contemporary Feature Gallery.

Agnes Etherington Art Centre, Modern Fuel Artist-Run Centre and Union Gallery are pleased to co-present the 2020–2021 Professional Development Series. Taking place over the Fall and Winter seasons, the series includes 6 free workshops co-facilitated by local artists and arts professionals from each organization, geared towards emerging, mid-career and student artists and curators. Participants will gain enhanced experiential learning opportunities, develop a toolkit of skills in preparing for a career in the arts, and extend networks with Kingston’s contemporary art galleries.

Artist statements are often the most difficult and necessary writing that an artist will produce. Crafting a strong artist statement is necessary for communicating your ideas and practice to a wide-ranging audience. This workshop will provide tips and techniques for focused and clear writing, from initial brainstorming to the final polished text.

deneige nadeau is an angry dyke, a gutter philosopher, and a fucker-up-of-shit. She spends her time being an unruly student, moonlighting as a “writing consultant.”

Facilitated by Sunny Kerr and Carina Magazzeni, hosted by Agnes

This workshop is designed to immerse participants in the processes of developing an idea for an exhibition or other curatorial program. It will include a series of presentations on different curatorial approaches. In the second half of the workshop, participants will be asked to brief a curatorial proposal (real or imaginary). Participants will leave with the beginning stages of a proposal that they can continue to build upon.

Sunny Kerr has developed numerous exhibitions, acquisitions, programs, texts and publications in his role as Curator of Contemporary Art at the Agnes Etherington Art Centre. His approach to curating focuses on emergent issues and practices in contemporary art, as well as experimental formats of presentation and participation. He brings an artist’s background to a curatorial practice developed through public sited intervention. His recent exhibitions include inventive work with collections and projects by artists such as Brendan Fernandes, Richard Ibghy and Marilou Lemmens, Chris Kline, Yam Lau, Tau Lewis and Walter Scott. Kerr completed his BFA at Nova Scotia College of Art and Design University and earned his MFA at York University in 2006. He has taught at several Canadian universities and is currently a PhD Candidate in Cultural Studies at Queen’s and a lecturer in the Screen Cultures and Curatorial Studies graduate program.

Carina Magazzeni is a femme settler of Italian-Scottish descent, born and raised in Onguiaahra/Niagara and currently based in Katarokwi/Kingston, situated on Haudenosaunee and Anishinaabe territory. Magazzeni is the Director of Union Gallery at Queen’s University and maintains an independent curatorial practice. She holds an MA in Cultural Studies from Queen’s University, a Graduate Diploma in Event Management from Niagara College, and a BA Honours in History of Art and Visual Culture with a Concentration in Curatorial Studies from Brock University. Recent curatorial projects include, more light than heat: Teresa Carlesimo with Michael DiRisio (Rodman Hall Art Centre, Brock University); Let’s Talk About Sex, bb co-curated with Erin Sutherland (Agnes Etherington Art Centre, Queen’s University); Many Voices: Indigenous Art co-curated with Tania Willard (Bellevue House National Historic Site).

Join Taylor Norris, Public Art Coordinator for the City of Kingston to participate in a workshop on applying for Public Art opportunities in Kingston and beyond. Taylor will cover the submissions process for both temporary and permanent public art calls, including best practices and answering frequently asked questions artists commonly face in the application process.

Taylor Norris is an artist, arts administrator, public servant, and activist based in Kingston, Ontario. Currently serving as the Public Art Coordinator for the City of Kingston, Taylor actively works to create accessible visual contemporary art and artist opportunities in a local and regional context. Taylor also holds a Bachelor of Fine Arts and Arts Administration from the University of Ottawa, as well as a Diploma in Media Art from Sheridan College. As a queer fifth generation Wolfe Islander of settler and Métis ancestry, Taylor is an active participant in many different communities and is always seeking opportunities for collaboration through the arts and environmental initiatives.

Anne-Sophie Grenier is the Executive Director of Modern Fuel Artist-Run Centre. She holds a Masters of Management in International Arts Management, from Southern Methodist University and HEC Montréal. In her graduate studies, she focused on the role that art co-ops and artist-run centres play in fostering innovation and creative placemaking. She also holds a B.A. in Communications Studies (Video Production) with a minor in Political Science from Concordia University and a Diploma of College Studies in Commerce from Champlain College. Her career has brought her across many different fields – from communications for a non-profit operating in Canada and Uganda, to documentary television production, and the production of major music, arts, and sporting events. Anne-Sophie is also a practicing performing artist and video producer.