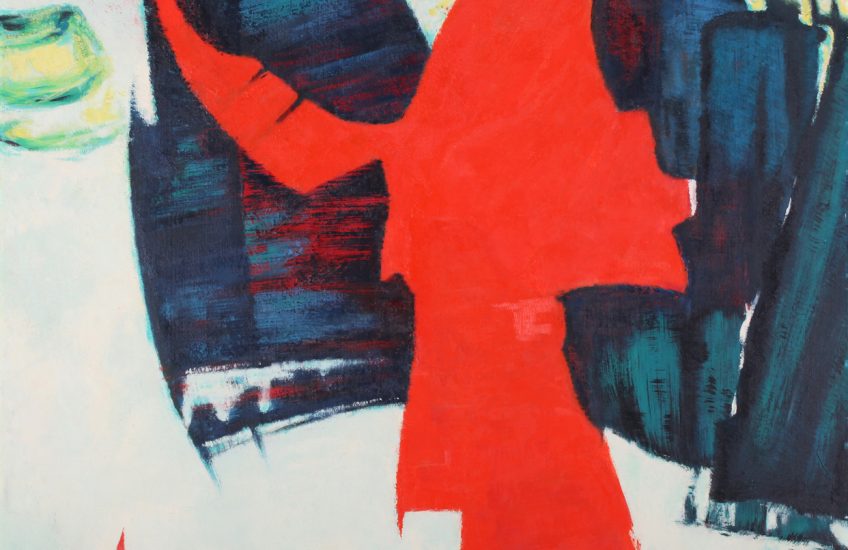 The Agnes’ In the Present: The Zacks Gift of 1962 exhibit is a vibrant snapshot of 20th-century Canadian cultural change.

The exhibit features pieces donated by Queen’s alumnus Samuel J. Zacks and his wife Ayala Zacks—avid art collectors who supported budding Canadian visual artists and passed on their collection through the exhibit.

Donated by the Zacks in 1962, In the Present is composed of pieces created from 1958 to 1962, a tumultuous period in Canadian history. These five years span the Space Race, Cold War, civil rights movement, and the Quiet Revolution, a separatist period in Quebec defined by Quebec citizens’ conscious effort to be recognized as equals in business and government.

The exhibit also provides a unique illustration of a multi-layered Canadian identity, boasting artists from across all of Canada.

The challenge of encompassing a moment in Canadian history is no small feat. Despite Canada being a large and diverse country, this exhibit captures an all-encompassing identity through visual art. The collection brings different styles, mediums, and themes into one final product.

Throughout the exhibit, there are nods to the Painters 11—a group that first exhibited together in 1954 and dissolved in 1960. The ensemble pushed abstract expressionist art through the diverse artistic visions of its members.

The Zacks gift is composed of pieces by a number of the members of the Painters 11, but it also holds several works by up-and-coming artists of the 1960s like Lisa Gervais and Anne Kahane. The Zacks were enthusiastic to help foster unacknowledged artistic talent by purchasing the works of newcomers to the Canadian art world

Pieces in the exhibit aren’t limited to paint and canvas. There are sculptures within the exhibit that reflect the excitement surrounding space exploration, the intrigue of Inuit art, and the experimentation of materials within sculptural work of the 1950s and ’60s.

This collection of Canadian art isn’t only unconventional in medium, style, and materials. It also pushes the envelope in terms of subject matter.

Later works by Markle were ruled obscene by an Ontario court magistrate after they were exhibited at the Dorothy Cameron Gallery, causing a debate over what was appropriate for public consumption in art galleries.

Further, In the Present features artists with Indigenous heritage and brings their cultural inheritance into focus. Charlie Inukpuk, an Inuit carver known for his depictions of mothers, thematically emphasizes nurturing relationships through exaggerated hand size in his work.

While including diverse themes and peoples, In the Present captures an uncertain time in Canadian history. The late ’50s and early ’60s were a period defined by political tensions and the reclaiming of cultural identities.

The pieces in this exhibit work together to capture the changing times through their innovative use of the abstract, pushing conventions within the visual arts and bringing a multi-faceted perception of Canadian identity.

The exhibit runs until April 7 in the Historical Feature and R. Fraser Elliott Galleries.