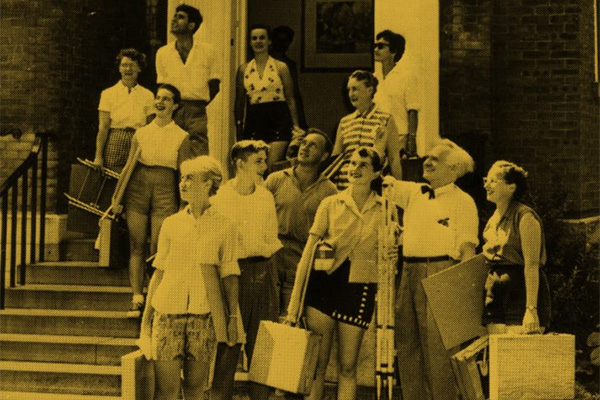 The Agnes Etherington Art Centre is in a celebratory mood as it marks its 60th anniversary with a suite of special events starting Thursday, Oct. 12.

From bringing six decades of history to life to highlighting the gallery’s role in the community, while at the same time having a good bit of fun, the celebrations kick off with the “Shaken, Not Stirred: 60th Anniversary Gala,” a semi-formal reception that harkens back to 1957 when the Agnes opened. Organized by the Queen’s Art History Departmental Student Council, the “elegant jazz-inflected” event will bring together the Queen’s and Kingston communities for a celebration of the visual arts.

There will be a number of VIPs attending as well as a special guest or two at the event, according to Jan Allen, Director of the Agnes.

“It’s been fun for us to plan for this celebration, in part because we are proud of the Agnes’ history but also because the gallery is really thriving. It’s a great moment to look back at our history,” she says. “We’ve made a slate of events that we hope will appeal to all the different facets of our audiences, the various communities that we serve.”

The gala is followed by “Make Art Like It’s 1957” – featuring hands-on art-making activities in the André Biéler Studio – on Friday, Oct. 13, as well as guided tours throughout Homecoming Weekend on Saturday, Oct. 14 and Sunday, Oct. 15.

Also on Saturday, Oct. 14 is “A Tale of Two Houses,” a pair of talks featuring historians Joan Delaney and Bob Butcher and Alicia Boutilier, Chief Curator of the Agnes, that will take a closer look at the history of two residences that once belonged to founder Agnes Etherington and her family: Fettercairn in Chaffey’s Lock and Etherington House here on campus.

On Sunday, Oct. 15, the Agnes and the Modern Fuel Artist-Run Centre will co-host “100 Years of Art,” a retrospective series of 10 very short talks about the histories of the two art centres, which happen to share a birthday on Oct. 12. While the Agnes is marking 60 years, Modern Fuel is celebrating its 40th anniversary.

Wrapping up the celebrations is Distinguished Lecturer Eric Jan Sluijter, who will speak on “Rembrandt, Value and the Market for Paintings in the Dutch Golden Age,” on Thursday, Oct. 19 in the Ellis Hall  Auditorium. The event will shine a light on The Bader Collection as it also marks its 50th anniversary this year.

Apart from the events, the Agnes is also launching an online chronology of the art centre over its six decades. Put together by a team led by curator Boutilier, with much assistance by Queen’s Archives staff, the project has created an online illustrated history of the gallery.

“That’s a big breakthrough for us because, until now, we’ve only had a couple of paragraphs online to capture our rich history,” Ms. Allen says. “We are now able to enlarge that account with fascinating images that reflect the change that has occurred across six decades. The gallery has grown exponentially. We hope that Agnes Etherington would be happy with the gallery today, to see that her vision has taken root and flourished in the way it has.”

For further information about the celebrations, visit the Agnes Etherington Art Centre website.