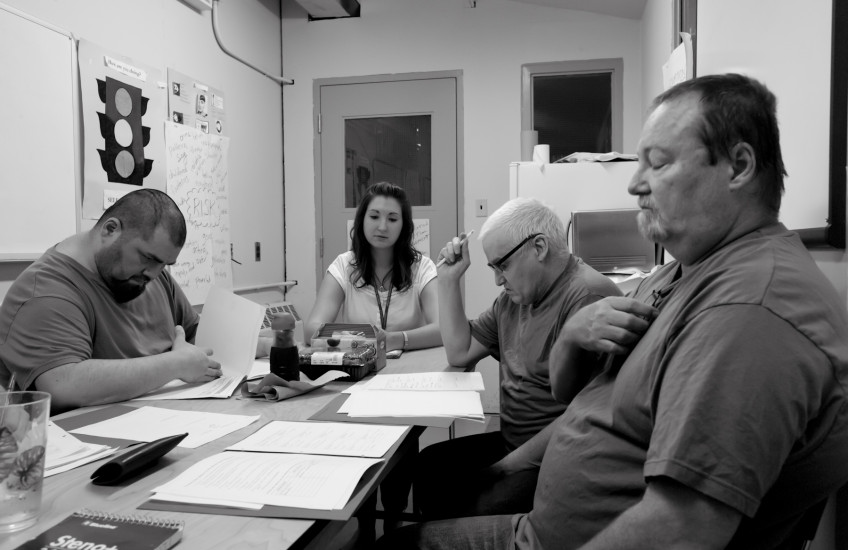 Shortly after Kingston Penitentiary (KP) closed in 2013, the public could tour the prison with the proceeds going to charity. People snapped up the tickets within minutes, eager for a glimpse inside Canada’s most notorious correctional facility.

What they didn’t get to see – the interactions, routines and relationships inside KP when it was operational – is highlighted in Geoffrey James: Inside Kingston Penitentiary, a new exhibition currently running at the Agnes Etherington Art Centre.

“Space changes after people leave, and Geoffrey really wanted to capture the prison while it was still working,” says Jan Allen, the director of the Agnes and the curator of the exhibition. “Inside the walls of the prison was a world unto itself with its own stated and unstated rules and hierarchies. Geoffrey’s photographs offer windows into aspects of that world.”

Mr. James, a recipient of the Governor General’s Award in Visual and Media Arts, has spent the past 30 years photographing the man-made landscape. He was drawn to the institutional setting of KP when he learned the prison would close after 178 years of operation. The artist and the Agnes Etherington Art Centre worked together on a proposal to gain access to the prison. Ms. Allen says she was impressed by the cooperation and assistance they received from the Correctional Service of Canada.

Before going into the prison, Mr. James conducted exhaustive research to understand the history and issues within the prison. He then photographed KP over several months, with each session spanning two or three days. Ms. Allen says Mr. James’ approach allows him to convey a feel and sense of the place even though he was an outsider approaching the subject as an artist.

“Geoffrey took the time to talk with inmates, staff and prison administrators. The images in the exhibition are a result of those repeated encounters,” says Ms. Allen, adding that the artist was careful to avoid sensationalizing the subject matter. “Geoffrey’s work responds to and captures the subtleties of this loaded environment in a way that respects its complexities.”

Mr. James will discuss his work with author Stephen Reid, who penned his first novel while incarcerated at KP, during Kingston WritersFest on Thursday, Sept. 25.

The exhibition continues until Dec. 7. Information about the hardcover publication and other program events related to this exhibition can be found on the Agnes website.