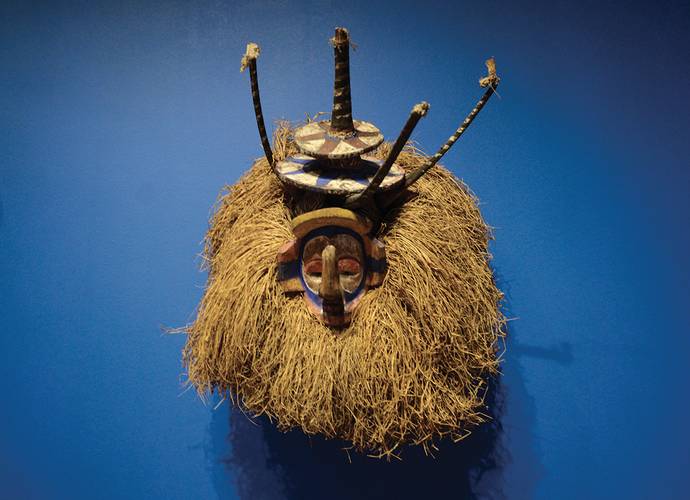 The Justin and Elisabeth Lang Collection of African Art is an eye-opening arrangement of masks, statues and photographs that capture the diversity of African cultures.

The art works, showcased at the Agnes Etherington Art Centre (AEAC), is a small sampling from the original collection, which includes over 500 objects. This particular selection is called Protection and Social Harmony in the Art of West and Central Africa.

At first, I was pulled in by the rich colours used in the masks and statues on display — and how despite the darkness of the brown hues, the amount of detail visible in each mask was striking.

One mask in particular, the Ndeemba mask of the Yaka peoples from Congo, was used in the 20th century in ceremonies that marked the passage from adolescence to adulthood. The mask was different from the rest, with a yellow- red- and blue-painted face set on canvas against a lion-like mane of straw.

To me, the colours seem to signify the brightness of adolescence, while the mane and detailed headpiece capture the “growing up” aspect of the ritual — advancing onto bigger and better things.

Aside from the masks, the collection boasts an impressive selection of statues, many of which depict mothers breastfeeding and carrying children.

Some of these were modelled after real-life places and people, such as the Verandah Post, depicting a mother of twins. The sculpture once served an architectural function of the Ogboni society’s meeting house in Iloro, Nigeria.

With this provided cultural insight, it’s easy to appreciate the art on a new level. Each object has its own story, and many have been passed down for decades, giving every piece an added dimension.

The piece that stood out to me most in the collection was a photograph, Initiation rituals among Yaka people, that depicted masks similar to the Ndeemba mask being used as part of a significant tradition.

The photograph portrays two young boys, standing majestically with their headpieces on against a Congolese landscape, presumably taking part in the ritual.

The photograph captures the uses of these masks in different African rituals, and allows those of us that aren’t familiar with such cultures to form a higher admiration for them.

This collection only skims the surface of various African traditions — but delving deeper into the context of every piece provides important information that aids in teaching us about cultures that viewers may not have learned about through other mediums.