Saturday 15 May
14°C and Scattered Clouds
Agnes will remain closed in compliance with the province-wide lockdown to curb the spread of COVID-19. All online programming will continue as planned. 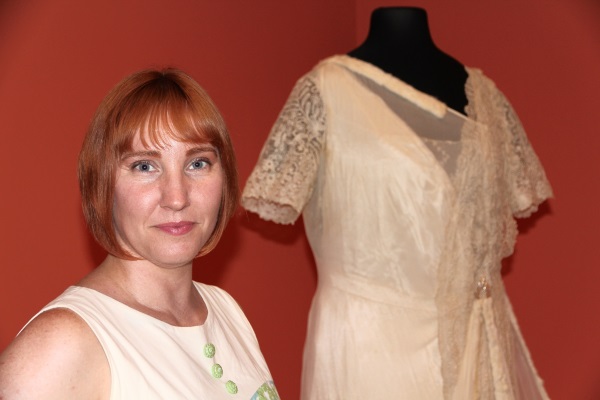 It’s a relationship built over the past couple of years. However, the two have never met.

In fact, Etherington, an integral character in the history of Queen’s University, passed away decades before Ms. Dowdell was even born.

Ms. Dowdell is the guest curator for an exhibition featuring some of Etherington’s clothing, primarily evening gowns, and there are few better ways to know someone than through their clothing, she says.

“I feel that historical clothing is the most intimate and personal witnesses to history,” says the Ph.D. candidate whose focus is on 18th-century clothing. “So you are looking at these and you know there was a human body in this. When you put these on display and you get them padded out and mounted properly, it’s like you are seeing the historical body again. There’s all these little details that you get that make you realize these are real people. It’s one of the mediums of connecting with the past that’s really visceral. These things, they get dirty, they get torn, they get mended.”

Etherington was well known for her love of fine clothes. While at times private, Etherington, Ms. Dowdell says, was no shrinking violet and had a definitive frame, one that Ms. Dowdell has come to know very well. In creating the exhibition she also needed to get to know Etherington the person.

“While I feel like I have gained a few insights into Agnes, it’s almost ended up raising more questions about her though,” she says with a laugh. “It’s made me feel more and more that I wish I could have met her. She would have been a really interesting person.”

The exhibition is being held at the Agnes Etherington Art Centre (AEAC), which includes her former home. Etherington donated it to the university to be the first home of the arts department.

Walking through the exhibition, Ms. Dowdell explains each piece – a formal gown, something for a nice garden party, Etherington’s fur-trimmed wedding dress, and a black intricate creation holding centre court that grabs attention as much today as it likely did a century ago.

The complexity of the dress is not lost on Ms. Dowdell.

“The way that dress goes together…” she says before pausing. “I am a highly-experienced seamstress myself and that dress is incredibly complex. There are so many layers to it. Angles, layers, textures, the piecing, there’s so much more inside it that you don’t see. There are multiple layers on the inside that aren’t visible.”

The result is stunning.

The idea for the exhibition began in 2009 when Ms. Dowdell volunteered at the Agnes, using her expertise as a dress historian to help identify pieces in the Queen’s University Collection of Canadian Dress, including some that belonged to Etherington. After graduating from the University of Alberta and entering the PhD program in Art History at Queen’s, Ms. Dowdell continued her work with the collection under a practicum. More quality pieces, such as the wedding dress were identified and the idea became a reality when the Agnes invited Dowdell to curate an exhibition.

“It was decided that it would be nice to show a different side of Agnes,” Ms. Dowdell explains. “It was such an interesting thing for the art centre to have this clothing collection belonging to the founder.”

Artful Dressing: The Fashion of Agnes Etherington continues at the AEAC until Nov. 9.