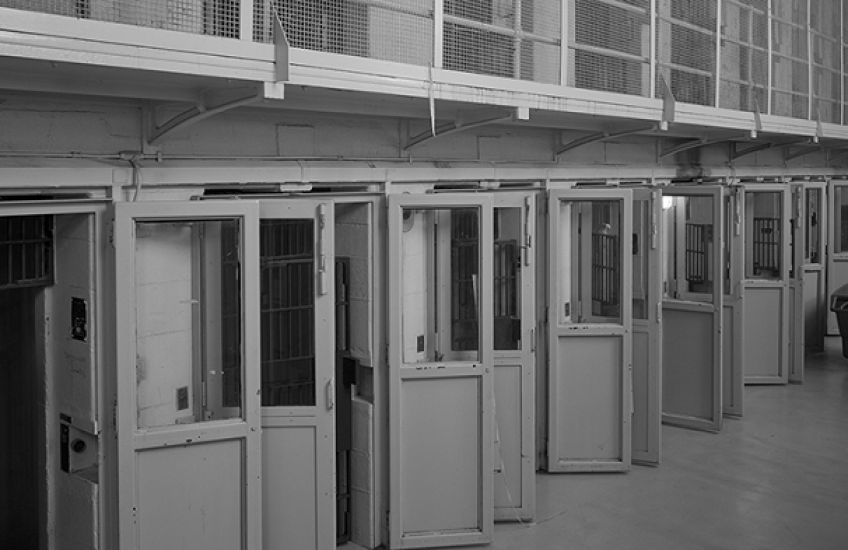 For the last 178 years, Kingston Penitentiary has been looming over the city, both literally and figuratively. The massive Victorian façade hides a painful past that most of the city will never really understand: behind those walls were riots, deaths, and torturous punishment. When KP closed last fall, the sold-out tours revealed our morbid curiosity as we gawked and wondered. For those that didn’t get one of the coveted tickets, a new photography exhibit at Agnes Etherington Art Centre reveals the inner workings of the prison—the mundane as well as the tragic—with an unexpectedly compassionate lens.

Geoffrey James, a Toronto-based photographer originally from the U.K., visited KP a number of times during the final months of its operation. The resulting exhibit and companion book, “Inside Kingston Penitentiary,” opened on August 30th. Many of the photographs are haunting black and whites showing a deserted complex of concrete and barbed wire, lonely shots that gesture towards the prison’s uncertain future. Others have a surprising black humour: “Exercise yard built for female inmates but never used,” for instance, depicts an asphalt rectangle completely unremarkable save for two pink plastic chairs in the centre, surrounded by barbed wire on all sides.

James excels with photos that hint at prison ritual and relationships. “Change of seasons ceremony” is a three-photo series showing the Aboriginal population honouring seasonal transitions with smudging inside a resplendent tipi—the cognitive dissonance of seeing the structure against a backdrop of barbed wire is jarring. Other standouts show cell decorations. Some cells are completely covered in murals of Harley Davidson logos, flame motifs, and pin-ups. “Go Leafs Go!” is scrawled on one wall, a darkly funny testament to our country’s unending love for hockey. Other cell walls are more tragic: “This is Indian Country,” written on one, and “Tear down this wall!” written on another. In the administrative segregation cells, James documents hash marks for passing days, and etchings like “38 days left.”

In other photos, James turns the lens toward the Corrections staff: no-nonsense faces of wearied officers watching monitors or manning metal detectors. Often, these photos are juxtaposed with excerpts from Victorian prison regulations on the gallery walls: “They are not to gaze at visitors passing through the prison nor sing, dance, whistle, run, jump nor do anything which might disturb the harmony or contravene the rules of the prison,” for instance, from 1836.

James’ exhibit captures the everyday workings of KP with little rubbernecking over its most famous residents, Russell Williams and Paul Bernardo. They are only referenced obliquely, with a shot of the segregation exercise yard—a rectangle of rust and garbage on all sides—and a segregation cell with nothing more than a concrete bench and metal sink. Ultimately, the exhibit is thoughtful and empathetic, and rarely sensational. With the future of the grounds unclear—everything from condos to a marina have been discussed—residents of the city should most certainly take a moment to visit James’ show and reflect on how profoundly the prison has affected the city, and every person who passed through its walls.

Read more about the exhibit, including gallery hours, here.