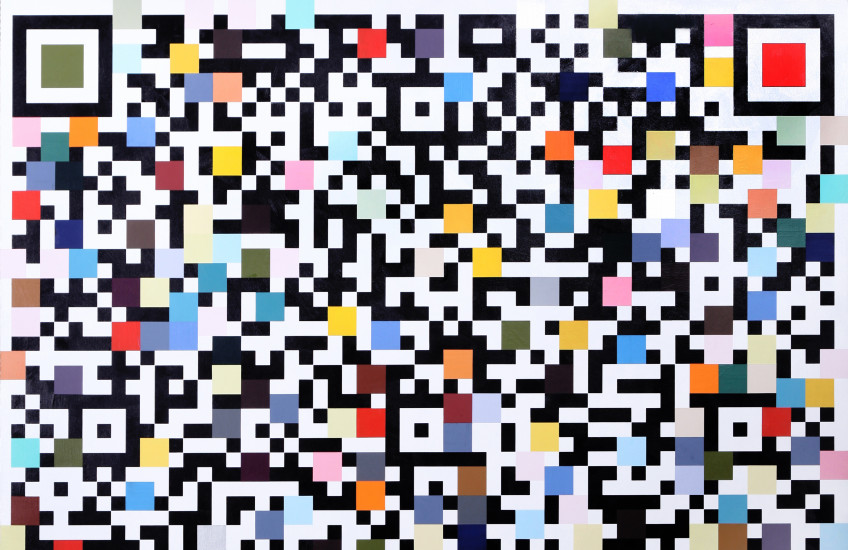 Vancouver-based Douglas Coupland may be best known for writing acerbic and hilarious novels such as Generation X and The Gum Thief, but he’s also quite an accomplished visual artist. He works in a wide range of media, and some notable sculptural pieces include Digital Orca adjacent to the Vancouver Convention Centre and Beaver Dam in Toronto’s Canoe Landing Park.

Now, one of the year-ending exhibitions at the Agnes Etherington Art Centre takes its title from one of Coupland’s acrylic paintings: I Hope Humanity…The painting itself is a massive, multicolored rendering of a QR code, that when scanned by any smart phone produces text reading, “I hope humanity changes quickly, and that we are able to protect ourselves from what we are now.” Coming from the usually playful Coupland, the soberness is striking.

Indeed, the entire exhibition effects such a jarring solemnity. “While the global environment struggles to cope with destruction from human development, hope for change is paramount to averting further damage, as well as reversing such ruin,” reads the introductory panel to the exhibit. Each of the pieces that follow comments on the relentless encroachment of humanity on the natural environment, and the wasteland that results.

For instance, Carol Condé and Karl Beveridge’s The Fall of Water is a stunning revision of Breugel’s The Fall of the Rebel Angels. According to the accompanying document at the AEAC, Condé and Beveridge photographed and digitally manipulated each Breugel character before reassembling them all into a composite. Hidden in the mix are logos of such conglomerates as Coca-Cola and Goodyear, pipes funneling into empty heads, belly-up sea creatures of all sorts, and other biting images. To catalogue them all would surely do them a disservice.

Adjacent to this veritable onslaught of imagery from Condé and Beveridge is the sculptural piece Smoke Signal #1, by Don Maynard. A twisting mass of aluminum and metal fashioned from former HVAC units, the environmental implications are clear: we, as a species, need rescuing from ourselves—that is, if we even notice so many smoke signals. Day after day, this show suggests, it seems that we don’t.

Other pieces in the exhibit include works by Rebecca Soudant, Eleanor Bond, and Robert Fones, in media that include photography, tapestry, and oil painting. If you plan to see one more exhibit before the end of the year, make it I Hope Humanity… and consider your own hopes for humanity. There’s a new year ahead, and endless possibilities for change.