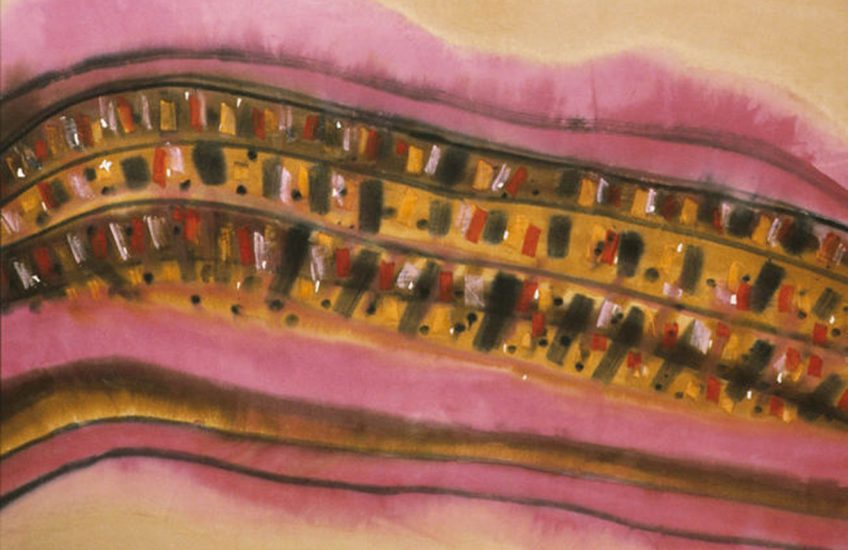 It has been said that good things come in small packages, and this is certainly true of three smaller exhibitions on view at the Agnes Etherington Art Centre on the Queen’s University campus. They are each of a size suitable for when you don’t have a lot of time, but would like to take a break from a hectic day or from the snow and cold outside.
The first exhibition is “Arctic I: Sovereignty in Pink” in the Samuel J. Zacks Gallery, running until April 6. Comprised of only about half a dozen works and a handful of photographs, this exhibition centres on the painting of the same name as the exhibition, by artist K.M. Graham. Not what you would expect or think of when you imagine images of or from the far north, the Colour Field Painting, with its bright pink and warm yellow and orange tones, was inspired by Graham’s fascination with the colours of arctic willow and the contours of the landscape. Verging on abstraction, the painting is also reminiscent of the diaphanous, billowing contours of the northern lights, as is another work by Graham in this exhibition.The title of Graham’s painting, Sovereignty in Pink, is a somewhat playful reference to heightened contemporary awareness of Canada’s role in the Arctic, at a time when it was asserting its authority in response to American incursions into Arctic waters. Included in the exhibition are several photographs by Graham’s fellow artist Allan Collier, documenting the Canadian Coast Guard’s regular patrols through the Arctic Archipelago. This exhibition, while referring to events of the early 1970s, is as relevant today as Canada fields challenges to its sovereignty over natural resources in the north.

The second exhibition, “Protection and Social Harmony in the Art of West and Central Africa,” takes you on an excursion to a climate and culture very different from our own, and highlights pre-modern three-dimensional works from two distinct regions of Africa. Rich in tradition and religious beliefs, each region in Africa supports a very distinctive artistic style, rather than there being a homogenous style across the continent, though many of the themes are similar.

While viewing this particular exhibition and enjoying the works on display, it is worth keeping in mind that the objects were probably not created as art objects, per se, but as ceremonial and otherwise functional items of power. Having said that, to get the full benefit of this exhibition the viewer should also reflect on the themes of the show — how each object contributed to either Protection (of the individual or group) or Social Harmony (within the group or community), or sometimes both. The Nkisi Nduda figure from the present-day Democratic Republic of the Congo, for example, is a power figure created through the collaboration of a sculptor and a specialist (loosely, a type of shaman), by which the figure assumes spiritual power. The power of the nkisi is accessed by driving a nail into the sculpted form, and the bristle of nails on the figure in this show is testament to its repeated use. The thorough accompanying texts for this exhibition are extremely helpful in interpreting the uses of each of the objects on display.

The third exhibition is “Tensions and Institutions: French Prints from the 19th Century”, wrapping up on March 2, so you’ll have to get in to see it soon. This exhibition is a visual showcase of transitions in art from the early to late 19th century, a period when artists themselves were responding to social changes in the wake of the French Revolution and adapting to a professional landscape where patronage was waning in the face of growing middle class affluence and nascent capitalism. Political and social commentary by artists became more common, and one of the first media in which it appeared and became prevalent was in the print.

In this show you will see the work of Barbizon artists such as Francois Millet, exploring an eroding pastoral lifestyle in the time of the Industrial Revolution; political and social satire in the prints of Honore Daumier; and the rise of Impressionism in works by Edouard Manet and Paul Cezanne. The art of this period underwent swift change in a short amount of time, but the small scale of the exhibition and the prints themselves keeps Tensions and Institutions intimate and manageable.

Whether you need a break from the winter weather, or just have a few moments in which to look at something new, these three smaller exhibitions are perfectly sized morsels of intriguing themes and imagery, and ideal viewing for a quick change of pace.