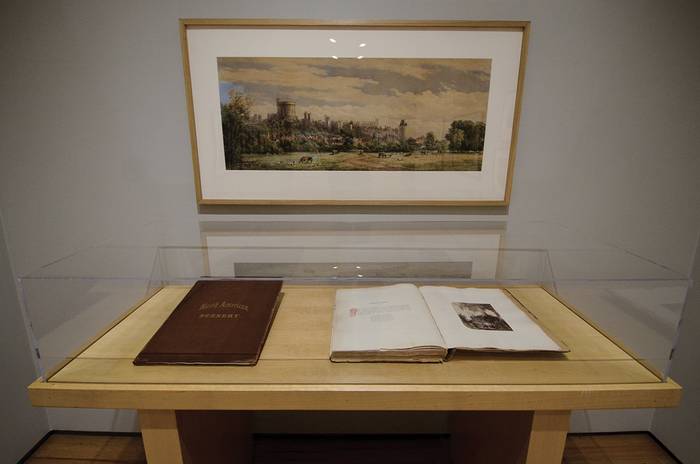 “Go to Nature in all her singleness of heart … rejecting nothing, selecting nothing and scorning nothing; rejoicing always in the truth.” This quotation by influential English 19th-century art critic John Ruskin is printed adjacent to the artwork on the walls of Agnes Etherington Art Centre (AEAC). And there’s no better way to describe the theme of The Park and The Forest exhibition.

Rolling hills, lush greenery and summertime foliage in the sprawling English countryside are the subjects of focus for the artists in this collection. Using mostly materials like watercolours, pastels, charcoal and pencil to depict these landscapes, a feeling of softness and lightness is evoked.

Viewing the works, I’m brought back to 15th- and 16th- century landscape studies of Dutch masters Pieter Brueghel the Elder and Jan Van Eyck. The piece that stands out the most in this sense is Windsor Castle by British portrait painter George Harlow (1879), painted in the classical panoramic landscape style.

The charcoal studies in the exhibition by James Duffield Harding are akin to the depictions of everyday life by Dutch master Rembrandt.

Using this classical approach as well as strong influences from the Royal Academy in London, 19th- and 20th- century artists took a modern approach to their landscape and nature paintings. At this time, they began using different materials such as watercolour and pastel, where the classic masters would have used oil paints.

In the 1830s, a more naturalistic style became favoured over detailed realism which led to a softer, more experimental landscape painting. With looser strokes and more of a focus on capturing the “feeling” of the landscape, excruciating detail was no longer the epitome of the style of British landscape in the 19th century.

The intention behind these works of art is what it appears at first glance, which is simply to capture a moment in time to show the world exactly what they saw. Because of this, the collection is very easy for audiences to digest.

These works, which could be considered studies in landscape depiction or just attempts to capture the appearance of nature during a time of day or time of year, exemplify the mastery of the artist’s craft in their ability to capture certain details in the natural world which is their subject matter.

Another noteworthy feature of this exhibition is a book of 46 photographs of paintings by Scottish photographer William Norton. Compiled together, this book shows the advancement of photography during the mid-1800s and provides context to the way the style of landscape painting was changing during that time in England.

The Park and The Forest exhibition will stay at AEAC until April 12.